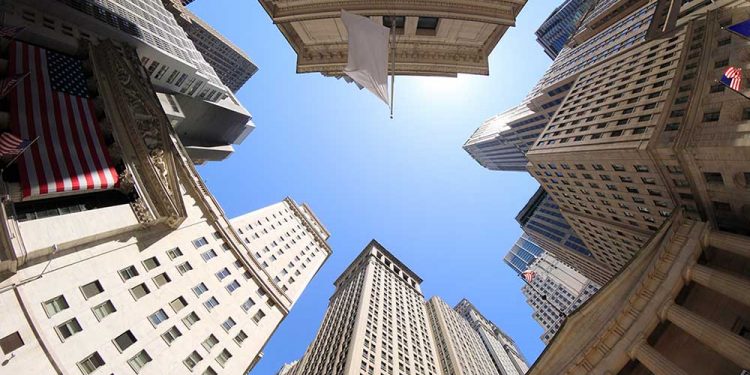 The S&P sectors saw energy and materials leading the upside. Meanwhile, consumer discretionary stocks led the downside with a loss of 1%.

The recent pattern of big price moves and high volatility trading finally calmed down on Friday as the indexes made smaller moves to the upside and downside. At around 3 p.m. ET, the Dow Jones industrials were down 0.2% after trading higher most of the afternoon. The Nasdaq lost nearly 1.3% while the S&P 500 fell 0.6%. The small-cap Russell 2000 traded 1.2% lower. Losses continued to deepen into the close.

Volume was running higher on the Nasdaq and lower on the NYSE vs. the same time on Thursday. Elsewhere, the yield on the 10-year Treasury note continued to hold above 2% on Friday.

Several U.S. companies have announced plans to pull at least some of their operations out of Russia, including Dow Jones leaders McDonald’s (MCD), Goldman Sachs (GS) and Exxon Mobil (XOM).

McDonald’s stock shot up 2.9%, leading the upside among blue chips, while Goldman Sachs reversed an earlier gain to a 0.2% loss. Yet MCD still looked poised to finish lower for the fifth week in a row. Exxon rose 0.6%.

Among leading Dow Jones stocks Caterpillar (CAT), Travelers (TRV) and Amgen (AMGN) led the upside with gains of over 1% each. On the downside, JPMorgan (JPM) and Nike (NKE) sold off over 2% each.

Over in the Nasdaq, internet companies’ stocks weighed on the index. Google and Meta Platforms stock both fell after the European Union and the U.K. launched antitrust investigations into whether companies tried to illegally cooperate in digital advertising.

These three shippers are all extended from recent breakouts. But another shipper, Genco Shipping & Trading (GNK), neared a 22.10 buy point of a 5-1/2-month deep cup base. Shares fell in afternoon trading but remain just 4% away from the entry.

Outside the Dow Jones, Quanta Services (PWR) rose 3% and scored a breakout above a 124.79 standard buy point in a cup base. Volume was heavy and the relative strength line is at new highs. But the stock barely topped the entry before fading back below it.

Hence, Quanta’s SMR Rating is solid at a B on a scale of A to E.

However, overall market risk remains a point of concern for investors and a reason to remain cautious when making new buys.