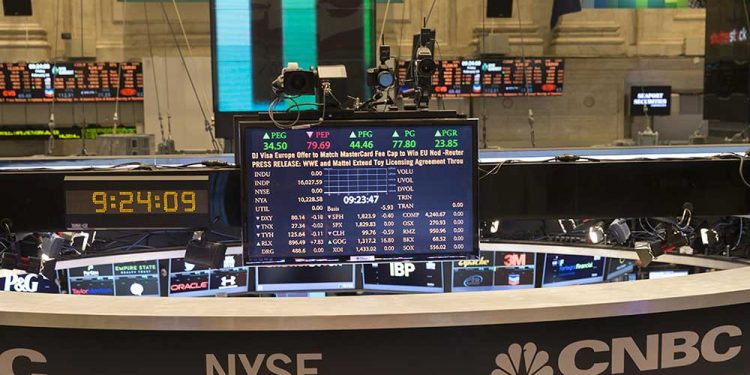 The Dow Jones Industrial Average traded off intraday lows but ultimately closed lower on Wednesday. Meanwhile, the S&P 500 and Nasdaq also recovered from earlier losses but closed down after briefly trading higher in today’s session.

Investors digested shocking inflation data on Wednesday, which showed that June’s consumer price index jumped to rate of 9.1% on a year-over-year basis. This was above the Dow Jones estimate for a rise of 8.8%. It was also the highest since November of 1981 and shows consumers paid sharply higher prices for goods in the month of June as inflation continues to stifle the U.S. economy.

The Dow Jones industrials closed down 0.7% after trading much lower earlier in the session. The S&P 500 also erased early losses but still closed down 0.5%. Meanwhile, the Nasdaq reversed higher in afternoon trading, but closed down 0.2%.

All three major indexes are still struggling with resistance at their 10-week lines. Also, the Nasdaq was turned away after hitting resistance at its 50-day moving average this week, which shows the index remains in a downtrend.

Small caps fared the best, with the Russell 2000 down only 0.1%. Volume was higher on the Nasdaq and on the NYSE vs. the close on Tuesday, according to early data. Consumer discretionary stocks led the upside among the S&P 500 sectors, while industrials and health care stocks lagged.

Shares of Delta Air Lines (DAL) closed down 4.3% on Wednesday after the company reported second-quarter earnings that missed expectations, although sales beat views. Earnings per share improved from a loss of $1.23 a year earlier to a profit of $1.44 in the June-ended quarter. Meanwhile, revenue rose 94% on a year-over-year basis as travel stocks continue to recover from the pandemic lockdowns last year.

The stock recovered from deeper losses earlier. Shares sold off in heavy trading and were met with resistance at the 21-day exponential moving average this week.

American Airlines (AAL) and United Airlines (UAL) dropped alongside Delta. American lost around 3%, after gaining 10% on Tuesday, while United fell less than 1% Wednesday. American and United are set to announce Q2 earnings a week from Thursday.

Leading the downside among Dow Jones stocks on Wednesday were UnitedHealth (UNH) and Boeing (BA). UnitedHealth, a recent breakout stock and Leaderboard stock, lost 2.6% as shares faded from a recent 507.35 double-bottom buy point. The stock also proceeded to slip below its 21-day line but remains above its 50-day line.

On Friday of last week, shares also moved above a 518.70 cup-with-handle entry. This breakout still remains intact as the stock hasn’t triggered the 7% sell rule from this buy point.

Fellow managed care stocks like Centene (CNC) and Humana (HUM) also faded from recent breakouts above buy points. Centene lost 2% on Wednesday and moved below an 87.44 buy point of a double-bottom base. Shares remain above support at the 21-day and 50-day lines.

Humana also faded from a recent 475.54 buy point after falling more than 2%.