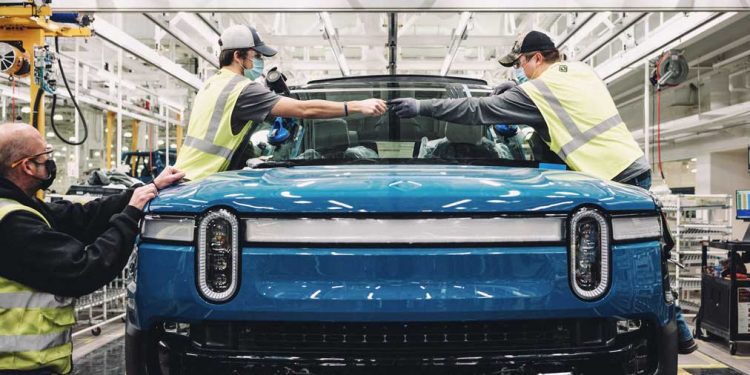 RIVN stock sold off hard overnight after skidding to a record low in Thursday’s session. As for Tesla stock, shares fell from key resistance and back below its 200-day line.

DocuSign (DOCU) met on EPS and beat on sales, but its fiscal 2023 revenue guidance fell short. But DOCU stock, which crashed 42% after the prior earnings report, plunged in extended trade.

TSLA stock is on IBD Leaderboard, with COST stock joined the Leaderboard watchlist on Thursday. Costco, Regeneron and JBHT stock are on the IBD 50. REGN stock was Thursday’s IBD 50 stock to watch.

The consumer price index shot up 7.9% vs. a year earlier, the hottest inflation in 40 years, though that was in line with views. The Federal Reserve is a lock to raise interest rates at the March 15-16 meeting, kicking off what will likely be a big tightening cycle.

Rivian stock fell more than 10% in overnight action. RIVN stock tumbled 6.35% on Thursday to 41.16, a fresh record low. Rivian came public at $78 a share in early November and ran up to 179.47 in its first five trading sessions. But it’s been all downhill since then.

Tesla stock fell 2.4% to 838.30 on Thursday, dipping back below its 200-day moving average. On Wednesday, TSLA stock rose 4.2%, retaking the 200-day line but stopping just short of its 21-day moving average. That’s been a key resistance area for the EV giant and the major indexes.

Costco stock rose nearly 1% to 532.72 on Thursday, once again finding support intraday at its 50-day moving average, which also essentially coincides with its 10-day and 21-day lines. Shares are in a cup base with a 571.59 buy point, according to MarketSmith analysis. But COST stock is working on a handle. Investors already could use 545.39 as an early entry.

The relative strength line is right at highs, reflecting Costco stock’s outperformance vs. the S&P 500 index. The RS line is the blue line in the charts provided.

Regeneron stock climbed 1.1% to 630.36 on Thursday, bouncing from its 50-day line, which is almost identical to its 10-day and 21-day lines. Earlier, the biotech giant found support at its 200-day line. Throughout 2022, REGN stock has shown extremely tight action on a weekly basis. The RS line is at the highest level since late August.

REGN stock has a 673.96 buy point from a flat base within a longer consolidation. Investors could use 645.10, just above the Feb. 11 high, or 636.46, just above Monday’s peak, as early entries. The lower entry would also serve as a trendline break, while still being close to the 50-day line.

JBHT stock rose 1.3% on Thursday to 201.88, rebounding from its 50-day and 21-day lines. The trucking operator nearly broke out of its flat base on Monday, but reversed lower that day and fell though its 50-day on Tuesday. The RS line remains at record highs while JBHT stock is still basing, giving it a “blue dot” on MarketSmith charts.

The current base is only 12% deep, and its lows are just above the highs of a prior consolidation. The buy point is 208.97.

Thursday was not a good day for the stock market rally. But it wasn’t that bad either. The major indexes sold off in the morning, with the Nasdaq down more than 2%. But the indexes came well off lows.

A pullback wasn’t a surprise after Wednesday’s big gains. So holding onto the bulk of the prior session’s advance and closing near session highs wasn’t too shabby.

A follow-through day could happen at any point to confirm the new market rally. But not all confirmed uptrends work, and a FTD right now would come with a lot of caveats.

The major indexes remain well below their 10-day moving averages. The 21-day line, a key resistance level in 2022, looms above that. Several other hurdles would follow.

In addition, a follow-through day should have stocks to buy. In Wednesday’s big rally, the big winners were beaten-down growth names that were far from any kind of entry. If there’s a follow-through day, you want stocks like Costco, Regeneron and J.B. Hunt participating.

A shaky stock market rally attempt continues within the context of a correction going back to early January or late November. There is no clear trend, and no reason to make a strong stand, long or short.

If you do take new positions, consider taking partial or full profits at 10% or even 5%. Too many stocks have flashed buy signals and run up briefly only to reverse lower.

Even if the technical picture brightens and quality stocks flash buy signals and start to work, investors should build exposure slowly.

In this news-driven market, a headline could send stock prices soaring or plunging, with little confidence in the news or market move. So stay safe.

At some point, a clear market uptrend will take hold. So be ready by staying engaged and refining your watchlists. Look for stocks such as Costco that are finding support at their 21- and 50-day lines instead of resistance.

The 200-Day Average: The Last Line Of Support?