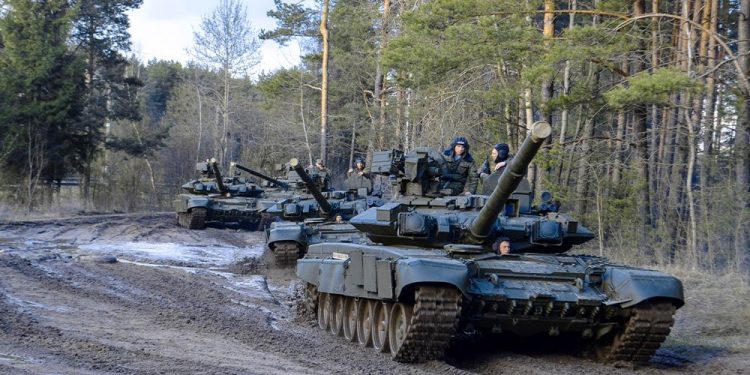 Amid the still volatile, headline-driven market, Costco (COST), Nucor (NUE), Quanta Services (PWR) and Union Pacific (UNP) are among Thursday’s top stocks to watch. Keep in mind that current stock market conditions should keep investors largely in cash and on the sidelines.

Microsoft, Nucor and Tesla are IBD Leaderboard stocks. Quanta was Tuesday’s IBD Stock Of The Day. Costco was Tuesday’s IBD 50 Stocks To Watch pick and was featured in this week’s Stocks Near A Buy Zone column.

In Europe, Frankfurt’s DAX benchmark index and the CAC-40 in Paris both tumbled more than 3% lower after Russia-Ukraine cease-fire talks failed to make progress after the countries’ foreign ministers met in Turkey Thursday.

The 10-year U.S. Treasury yield ticked up to 1.97%, after closing at 1.94% Wednesday following a three-day win streak. U.S. oil prices rebounded more than 5% Thursday, as West Texas Intermediate crude traded above $114 a barrel. WTI briefly plunged below $104 a barrel Wednesday before paring losses.

The Consumer Price Index hit a 7.9% annual rate in February, in line with Econoday estimates to hit another four-decade high in February. Consumer prices increased 0.8% month over month.

Wednesday’s The Big Picture commented, “Watch for evidence that: 1) The current leaders are not giving back much of well-fought ground. 2) New leadership is emerging. 3) Sellers are in fact weakening as a force within the stock market. 4) And authentic breakouts are taking good-quality stocks to new highs and making money for intrepid new buyers.”

Managed care giant UnitedHealth continues to show a 501.03 buy point in a double-bottom base. Shares ended Wednesday about 3% away from their latest entry after retaking their 50-day line. UNH shares were flat early Thursday.

Costco stock continues to build a cup base with a 571.59 buy point, according to IBD MarketSmith chart analysis. Keep an eye out for a handle to form, which would lower the risk-optimal entry. Bullishly, the stock’s relative strength line already hit new highs, a sign of extreme strength especially during periods of significant market weakness. Costco shares edged lower early Thursday.

IBD Leaderboard stock and steelmaker Nucor is back in buy range above a double bottom’s 126.77 buy point following Wednesday’s 3.2% gain that saw the stock retake the entry. The 5% buy area goes up to 133.11. Nucor stock was flat Thursday morning.

Tuesday’s IBD Stock Of The Day, Quanta Services, topped an 113.81 early buy point Tuesday during the session’s 8.2% surge. Meanwhile, the stock continues to move up the right side of a consolidation with a 124.79 buy point. PWR shares were unchanged early Thursday.

Union Pacific remains below its 256.21 flat-base entry after giving up the entry during Wednesday’s 3.1% decline. UNP shares were down 0.5% early Thursday.

Per Leaderboard analysis, Friday’s progress justified a boost in the position size by quarter to a half. The RS line had already been making new highs, which is a sign of a market leader.

Tesla stock skidded more than 1% early Thursday, on pace to give back a part of Wednesday’s 4.2% advance. Shares regained their long-term 200-day moving average Wednesday.

AAPL stock found support at its long-term 200-day line on Feb. 24, but remains below its 50-day moving average. The stock’s relative strength line remains near recent highs in the face of the stock market weakness, signifying that institutions remain hesitant to sell their Apple shares. Apple shares rose 2% Wednesday.