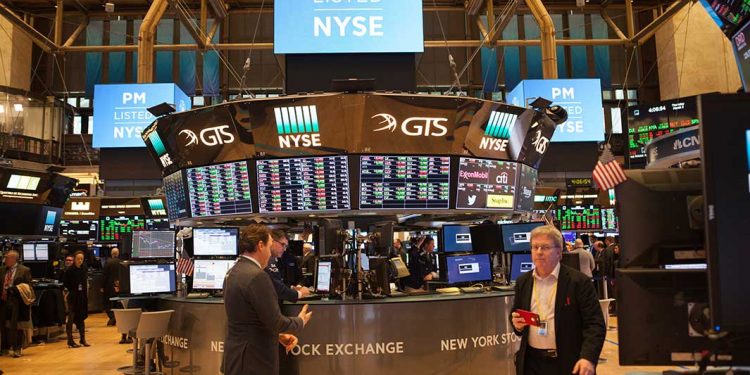 The stock market turned slightly lower in afternoon trading Friday after the monthly employment report showed stronger-than-expected job growth in June. Leaderboard stock UnitedHealth Group (UNH) was a top gainer in the Dow Jones Industrial Average. Tesla stock outperformed in the Nasdaq 100, up around 2%, while Enphase Energy (ENPH) led the S&P 500, up more than 3%.

The economy created 372,000 jobs last month, much higher than the Econoday consensus of 270,000. The unemployment rate stayed at 3.6% for the fourth straight month. Average hourly earnings rose 0.3% from May, in line with estimates. Year over year, wages increased 5.1%, slightly ahead of the 5% consensus.

Enphase is prone to volatile price swings, but it’s in position for another breakout try over a 217.33 entry.

UNH joined Leaderboard on June 27 when it topped the 500 level. The health insurer cleared a cup-with-handle base today, rising nearly 2% to 523.68. It’s still in the 5% buy zone from the 518.30 entry, but earnings are due late next week.

Other health care stocks outperformed in the Dow Jones today, including Amgen (AMGN), Johnson & Johnson (JNJ) and Merck (MRK). JNJ stock is holding above its 50-day line as it sits just below a 183.45 entry. MRK is also worth watching, with the stock just below a 95.82 entry.

Volume was lower on the NYSE compared to the same time Thursday. Nasdaq volume rose slightly.

How To Know It’s Time To Sell Your Favorite Stock

A strong, three-session move in the 10-year yield has helped lift the Direxion 20+ Year Treasury Bear 3x ETF (TMV) above its 50-day line. TMV was up more than 4%, bringing its weekly gain so far to nearly 10%.

Outside the Dow Jones

Lantheus (LNTH) gave a buy signal with a bullish move above its 50-day moving average. Shares jumped more than 7%.

Lantheus has two main business segments: precision diagnostics and radiopharmaceutical oncology. Revenue growth has accelerated for two quarters in a row at LNTH, up 38% and 126%. Earnings are due in late July. The Zacks consensus estimate is for adjusted profit of 70 cents a share, up more than 500% from the year-ago quarter. Revenue is expected to soar 102% to $203.98 million.

See Which Stocks Are In The Leaderboard Model Portfolio

Lantheus was one of the top gainers in the MarketSmith Growth 250, along with drug distributor McKesson (MCK), which gave a buy signal, jumping more than 5%.

Inside the IBD 50, Humana (HUM) joined a rally in managed care firms. It’s still in the early stages of breaking out from a yearlong consolidation.