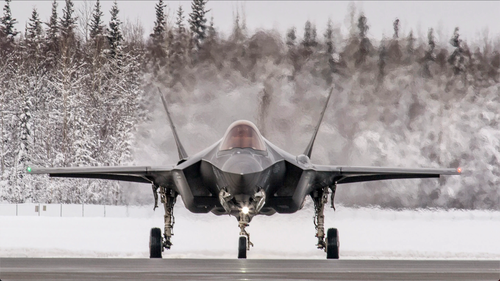 The most expensive weapons program in the world is about to experience cuts in the upcoming U.S. Defense of Department (DoD) budget.

The F-35 Joint Strike Fighter, a trillion-dollar program to swap out nearly every fighter jet in the Air Force, Navy, and Marine Corps, will experience procurement cuts under DoD’s upcoming “Selected Acquisition Report” (SAR), according to Bloomberg, citing people familiar with information about the weapon’s program cost.

DoD is expected to order 61 F-35s in the next budget, 33 less than what was planned. The reduction comes as the F-35 program is expected to exceed $770 billion since its inception later this year, when the federal government’s fiscal year begins on Oct. 1.

But the proposed slowdown in purchases may raise questions among lawmakers, Lockheed investors and overseas customers about a lessening of the U.S. commitment to a program projected to cost $398 billion in development and acquisition plus an additional $1.2 trillion to operate and maintain the fleet over 66 years. The people familiar with the budget plan asked not to be identified in advance of the budget release in the coming weeks. -Bloomberg

Once the SAR is made public, the DoD will explain the reduction in F-35 orders.

The rationale for the reduction won’t be officially explained until the proposed Pentagon budget is made public. But the request comes as negotiations with Bethesda, Maryland-based Lockheed over the next F-35 contract — for about 400 planes — are going slower than anticipated. And F-35s remain hobbled by flawed execution of a crucial upgrade of their software and hardware capabilities that’s estimated to cost $14 billion. – Bloomberg

The stealth fighter has been plagued with mounting costs after all sorts of flaws have been discovered. Robert Behler, the Pentagon’s independent weapons tester, told Bloomberg in early 2021 the jet has 871 software and hardware flaws that could affect combat operations. It could cost billions to fix these flaws.

The people said the DoD would increase orders for non-stealthy F-15EX Eagle II fighter jets. The F-15s were initially introduced in 1976 but have since been completely upgraded, with the possible capabilities of carrying hypersonic missiles.

A person familiar with the SAR said the rationale for purchasing fewer F-35s shouldn’t be viewed negatively as flaws are being worked out. The U.S. is expected to field 1,763 F-35s by the operational peak in 2036.