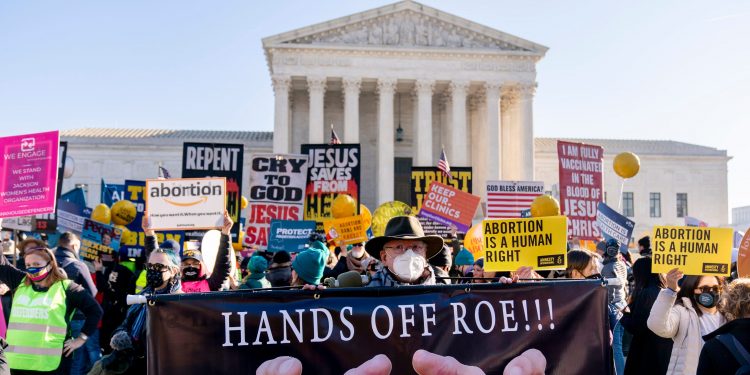 Abortion rights advocates and anti-abortion protesters demonstrate in front of the US Supreme Court on December 1, 2021, in Washington.

Democrats are preparing to make abortion a key issue in the midterms should the US Supreme Court diminish or strike down existing federal protections for women’s reproductive rights this summer.

Pro-choice groups say that outrage over losing the nearly 50-year precedent set by Roe v. Wade, which guarantees women the right to an abortion until about 23 weeks of pregnancy, would help galvanize voters during an election cycle where Democrats face steep odds of keeping control of Congress.

“The reality is abortion is absolutely going to be on the ballot in 2022, no ifs, ands, or buts about it,” said Kristin Ford, vice president of communications at NARAL Pro-Choice America.

At some point between May and July, the Supreme Court will issue a ruling in the case of Dobbs v. Jackson Womens Health Organization, which centers on the constitutionality of a Mississippi law that bans abortion after 15 weeks of pregnancy. Under current federal precedent, set by Roe v. Wade, the law is unconstitutional. Should the Supreme Court rule in favor of Mississippi’s law, it would undermine current precedent and open the floodgates for other abortion restrictions.

Should Roe v. Wade fall, it would drastically reshape abortion access across America, particularly for women of color, poor women, and immigrants. The procedure would be outlawed or seriously restricted in at least 21 states and as many as 26, according to the Guttmacher Institute, which tracks reproductive policy at the state and federal levels.

It would also be a cataclysmic political event.

“The anger and the outrage this could provoke, we believe it could drive historic turnout and cause a realignment at the voting booth,” said Samuel Lau, a spokesperson for Planned Parenthood Action Fund, the political arm of reproductive healthcare organization Planned Parenthood.

While Planned Parenthood Action Fund’s strategy for 2022 is “still coming together,” Lau said, “it will be our largest ever midterm electoral program.”

Polling consistently shows that a majority of Americans support abortion rights, oppose state laws that make it harder to obtain an abortion, and oppose overturning away with Roe v. Wade.

The prospect of the loss of reproductive rights has galvanized pro-choice women before. In January 2017, following the election of Donald Trump, hundreds of thousands of protesters, wearing pink “pussy hats” and carrying signs in support of women’s rights, gathered for what became known as the Women’s March in Washington and in cities across the US. Sister protests around the world drew millions of additional demonstrations.

In the 2018 midterm elections, a historic number of women ran for office, particularly on the Democratic side, and swept the party into power in the US House of Representatives.

Participants attend the Women’s March on Washington on Independence Ave. on Saturday, Jan. 21, 2017 in Washington, on the first full day of Donald Trump’s presidency.

‘An issue that is mobilizing for us’

While pro-choice groups told Insider they dread any possible rollback of abortion access, they are prepared to push to make it a major issue in the 2022 midterm election debate so far dominated by discussions of the economy, inflation, and the end of the coronavirus pandemic. “We are going to ensure that everyone knows that abortion bans could be coming to their states if they do not elect lawmakers committed to abortion access,” Lau said.

“We’re going to make sure they don’t get to hide the ball in how they got us here,” Reynolds said.

In Texas, Rochelle Garza is making abortion rights central to her campaign for state attorney general.

“My vision is to have a fully funded civil rights division, and units under that division, one of which is going to be reproductive rights,” said Garza, who in 2018 represented a 17-year-old immigrant woman who sought to obtain an abortion while living in a government-funded shelter in Texas.

Should she win, Garza said, said her office would seek legal paths around Texas’ abortion restrictions to get women in the state reproductive care.

Abortion remains a hot-button, culture war issue, and abolishing the procedure in all its forms has long been an animating issue for anti-choice Republicans. Trump notably won the support of religious conservatives by promising to install Supreme Court justices who would overturn Roe v. Wade.

“I think it all depends on where you are in this country,” said Lottie Shackelford, a member of the Democratic National Committee from Arkansas and chair of its Women’s Council. “It’s a big issue, but in the sense of how one incorporates it in their strategy for winning…I think it’s gonna be a race by race kind of thing.”

Garza, who has been endorsed by EMILY’s List, said she believed the best way for Democrats to talk about abortion in conservative-leaning states or districts was to ground their aguments as a matter of individual rights.

“I know when we talk about these issues, it’s really important that we frame it as, ‘This is an issue that families have to ultimately decide for themselves,'” Garza said.

The prospect of losing federal protection for abortion rights has awakened Democrats to the need to take state-level races more seriously, after nearly two decades of investing most of the party’s resources and attention on federal-level contests.

Pro-choice groups that also organized during elections, like Planned Parenthood and NARAL, pointed to gubernatorial and attorney general races in Texas and Georgia as potentially game-changing contests where electing a Democrat could help stave off further erosion of abortion access in those states.

They also aim to protect Democratic governors in states like Wisconsin, Pennsylvania, and Michigan, where Republicans control the state legislatures and acted as a stopgap for restrictions on reproductive care.

“The issue of Roe falling is going to be an issue that is mobilizing for us,” said Williams. “And we will ensure that we’ve got the plan for enthusiasm.”