Democrats are increasingly optimistic they could potentially retain their House majority or minimize losses this fall: report 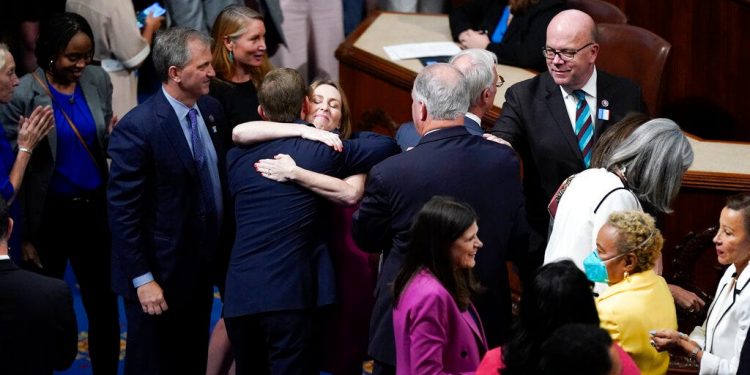 A cadre of House Democrats celebrate after final passage of the party’s Inflation Reduction Act at the Capitol on August 12, 2022.

Democrats increasingly see a pathway to hold the US House of Representatives or minimize seat losses, buoyed by opposition to abortion restrictions and a perception that voters will feel more confident about the economy when they cast ballots this fall, according to The Washington Post.

After months of Democrats fearing that they would lose dozens of House seats as well as their Senate majority, many in the party have sensed that they have turned a corner, although they still face a challenging environment where the party in power usually endures major losses in the first midterm election cycle.

The party is now eyeing GOP-held seats that were once seen as off-limits this year, per the Washington Post report.

And Democrats have sent additional funding to a dwindling number of vulnerable incumbents, according to party officials who spoke with the newspaper.

A game changer has been the conservative-dominated Supreme Court’s June vote to strike down Roe v. Wade, the landmark 1973 decision that legalized abortion in the United States and afforded a constitutional right to the procedure.

With abortion restrictions now varying state-to-state, Democrats have been galvanized by what they have declared as a major step backwards in the rights of women across the country.

Earlier this month, Kansas, a heavily Republican state, rejected an amendment aimed at weakening the right to an abortion in the state constitution.

President Joe Biden’s approval ratings — which have long served as an anchor for Democrats running in tough races — are seemingly on the rise.

And House Speaker Nancy Pelosi of California has been increasingly bullish about the party’s chances in the lower chamber — per the report — although she has long contended that the party would retain its majority.

Most of the party rank-and-file understand that there are many things that must still be overcome, including members fighting in myriad swing state districts that were gerrymandered by GOP-controlled legislatures.

But the sense that 2022 would be a terrible cycle across-the-board seems to have dissipated.

Democratic Rep. Elissa Slotkin of Michigan, who represents a highly competitive district outside Detroit, expressed optimism at the party’s chances.

“I definitely feel a different energy than even three months ago, but certainly six months ago,” she told The Post. “Six months ago I think people were putting safe bets on a real blowout. And I don’t see that happening.”

Democrats currently control the House 220-211 and 218 seats are needed to secure a majority, so Republicans are currently not that far off from picking up the requisite number needed to win back the Speaker’s gavel.

However, a recent CNN report detailed how Republicans have become less optimistic about their chances for major House gains this year, with Minority Leader Kevin McCarthy’s previous prediction of the GOP picking up 60 seats seemingly out of reach at the moment for many in the party.

The California Republican has long predicted that the party would win a House majority this year.

And several GOP sources told CNN that the party securing 15 to 30 seats, or even having a single-digit majority, is a more likely outcome at the moment.

But Republicans still feel confident about their chances this fall, according to Rep. Tom Emmer of Minnesota.

“Every great team experiences some adversity,” Emmer wrote after Ryan won the recent New York special election. “This will only make us stronger heading into Election Day.”