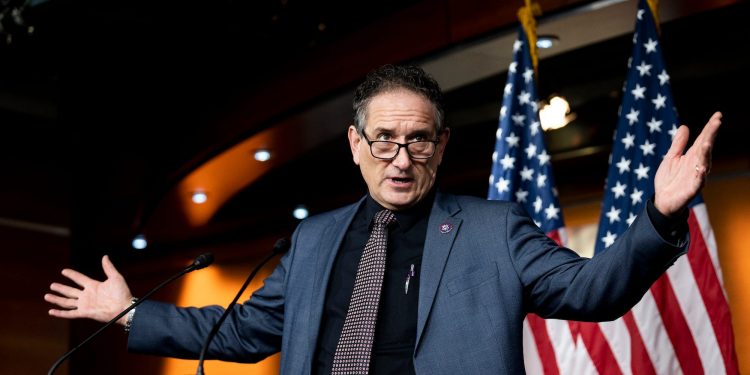 Democratic Rep. Andy Levin of Michigan at a press conference on Capitol Hill on February 9, 2022.

Democratic Rep. Andy Levin of Michigan tweeted a photo of himself in a yoga pose in the wake of a Supreme Court ruling that overturns Roe v. Wade and revokes the constitutional right to an abortion.

“In a moment of wildly conflicting emotions, of intense anger over horrifying Supreme Court decisions (with more to come) mixed with gratitude that I was just able to help pass the first meaningful gun reform in three decades, I turn inward, at least for a moment,” he wrote, adding the hashtag #AsanasWithAndy.

“Let us gather ourselves. Let us stretch and strengthen our muscles and joints. Let us breathe so deeply,” he continued. “Let us release toxicity and feel the deep love we have for each other. Let us ready ourselves to strive for justice, unceasingly.”

That series of tweets, posted around 3 p.m. on Friday, have since been deleted. But screenshots of the ill-timed tweets remain on the social platform.

Levin’s tweet came after Democrats were seen signing “God Bless America” on the steps of the US Capitol to celebrate the House passage of a new gun safety bill. Across the road, people were protesting outside the Supreme Court building following the abortion ruling.

Levin frequently practices yoga and has often tweeted photos of himself in various poses in the past.