Democrat Rep. calls for Michael Flynn to lose his pension after Army fined him for attending a 2015 Moscow gala with Putin: ‘Traitors don’t get pensions’ 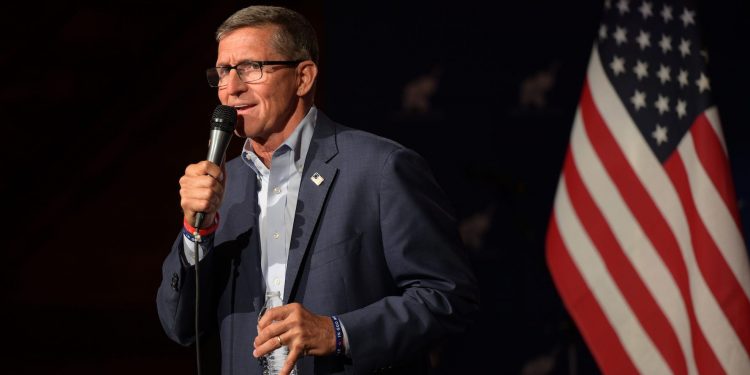 It comes after the US Army said it wants to collect nearly $40,000 from Flynn, who the Department of Defense cited for failing to disclose financial payments and in-kind compensation.

“Just take his pension away and call it even. Traitors don’t get pensions from the government they try to overthrow,” Rep. Ruben Gallego, a Democrat from Arizona, tweeted.

The Army fine stems from Flynn attending a 2015 Moscow gala to celebrate the anniversary of Russia Today, a Russian state news network. In a May 2 letter, the Army informed Flynn that they would be seeking $38,557.06 for his attendance at the gala, where he was seated next to Russian President Vladimir Putin, The Washington Post first reported.

The Army also said Flynn violated the US Constitution’s Emoluments Clause, which forbids members of the military from accepting payments from foreign governments without prior authorization. Flynn received approximately $450,000 in compensation from Russian and Turkish interests in 2015, investigators said.

“When there is a finding that a military retiree has violated the Emoluments Clause, the United States Government may pursue a debt collection,” Army lawyer Craig Schmauder said in the May 2 letter to Flynn, per The Post.

A spokesperson for Flynn did not immediately respond to Insider’s request for comment on Saturday.

Flynn recently testified before the House January 6 committee, where he pleaded the Fifth Amendment when asked whether he believed the violence on January 6, 2021, was justified.

Flynn publicly advocated for Trump to impose martial law and to use the US military to seize voting machines across the US amid the Trump administration’s efforts to overturn the 2020 presidential election.