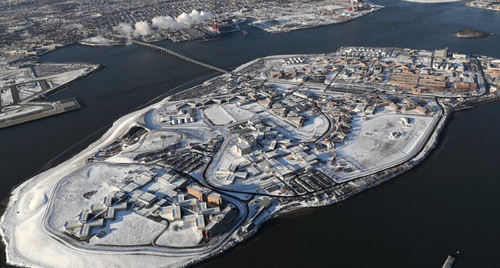 It isn’t just the streets of New York that are turning into violent hellscapes…it’s also the prisons.

This week at Rikers Island, a man awaiting sentencing marked the 12th death of a person in the care of the city’s Department of Correction this year, according to Bloomberg.

He was found dead of a “suspected suicide”, the report says.

One month ago, in July, he was found guilty of 12 counts of rape, sexual assault and other crimes by a jury. He was also convicted of abuse and manipulation of 6 patients in his care.

Department of Correction Commissioner Louis Molina said in a statement on Monday: “I am deeply saddened to learn of the passing of this person in custody. We will conduct a preliminary internal review to determine the circumstances surrounding his death.”

10 other people in the custody of the DOC have died this year and 1 person died “just after release”.

The DOC is working with the city on a five month plan to try and address what are being called “deadly conditions” at Rikers Island. Since a judge signed off on the plan in June, “at least four people” have died.

Some activists are even calling for the shut down of the facility, or for it to be placed into federal receivership.

Anisah Sabur, a campaign organizer with HALTsolitary and a former detainee on Rikers, concluded: “This is beyond devastating and outrageous. The Mayor, Governor, judges, district attorneys, and state and local lawmakers must do everything within their respective powers to release people and stop sending people to these deadly jails.”

…and once again, just like that, conspiracy theories about Jeffrey Epstein’s “suicide” have to take a back seat to good ole’ fashioned New York City incompetence. Sigh.