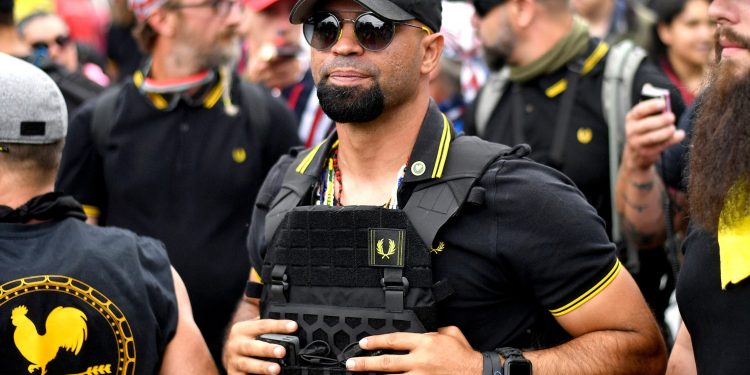 A federal judge Friday dealt a one-two legal punch in Enrique Tarrio’s seditious conspiracy case, ruling against the ex-Proud Boys leader’s bid to be tried prior to, and apart from, four of his alleged former lieutenants.

Only Tarrio had asked to keep the original August 8 trial date, the judge noted.

His  lawyer could not immediately be reached for comment; Tarrio has argued in legal papers that he was the only codefendant not physically present at the Capitol during the riot.

“All parties but Tarrio — including the Government — agree that good cause exists for the continuance,” the judge wrote.

Tarrio’s co-defendants had asked for the later date to give anti-Proud Boy publicity from the nationally-televised Jan. 6 committee hearings a chance to die down — and to allow more time to conduct polling in support of all of the defendants’ request to move the trial out of DC.

“The government agrees ‘that the timing of the hearings may prejudice the defendants,” the judge wrote.

Federal prosecutors also said they wanted more time to deal with the January 6 committee’s anticipated release of transcripts for some 1,000 witness interviews.

The committee has said it will release the transcripts to the public in September, but has been keeping the Department of Justice in the dark about when — or whether — they will make the transcript available to federal prosecutors before then.

Also on Friday, the judge declined the defendants’ bids to be released pending trial, but said he will consider new motions arguing that the trial be moved out of DC.

The five co-defendants are charged with seditious conspiracy, conspiracy to defraud the United States, conspiracy to injure an officer, destruction of government property and additional counts relating to their alleged roles in the January 6, 2021 riot at the Capitol.

Prosecutors allege that a force of 100 members of the extremist group were at the forefront of the attack on the certification of Joe Biden’s presidential win that day.

Codefendant Dominic Pezzola is charged with being the first to breach the building itself, for allegedly using a riot shield that had been ripped away from a Capitol Police officer to bust the window that allowed the first rioters to get inside.

They have pleaded not guilty to the charges.