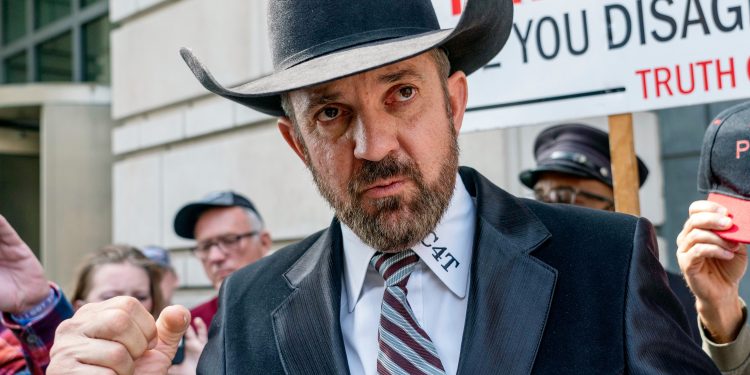 Otero County, N.M., Commissioner Couy Griffin stands outside the federal court after receiving a verdict in his trial on March 22, 2022 in Washington.

After already serving 20 days in jail, Cowboys for Trump founder Couy Griffin avoided additional prison time Friday as he was sentenced for his participation in the pro-Trump mob that attacked the Capitol on January 6, 2021.

Judge Trevor McFadden found Griffin guilty in March of trespassing on restricted Capitol grounds but acquitted him on a separate disorderly conduct charge. A Trump appointee, McFadden handed down the verdict because Griffin elected for a so-called bench trial, in which a judge — rather than a jury — reviews evidence and determines guilt or innocence.

In an hourlong hearing, McFadden sentenced Griffin to 14 days in prison but credited him for 20 days the Cowboys for Trump founder had served while awaiting trial. The judge also ordered Griffin, a New Mexico county commissioner, to pay a $3,000 fine and ordered a yearlong period of probation.

Handing down the sentence, McFadden called the January 6 attack on the Capitol a “national embarrassment” and a “dark day” for Washington, DC, and the country. But McFadden noted that Griffin had not entered the Capitol building itself but only trespassed on the grounds outside the building, putting him at what the judge called the “minimal end of criminality.”

McFadden said the “vast majority” of Capitol rioters who remained outside the building were “not charged at all,” and he suggested that Griffin only faced prosecution if he hadn’t “gone to such lengths to publicize his actions.”

McFadden’s sentence effectively ruled out any further prison time for Griffin, barring a violation of his probation, in connection with his involvement in the January 6 attack. But the judge

This is a developing story.