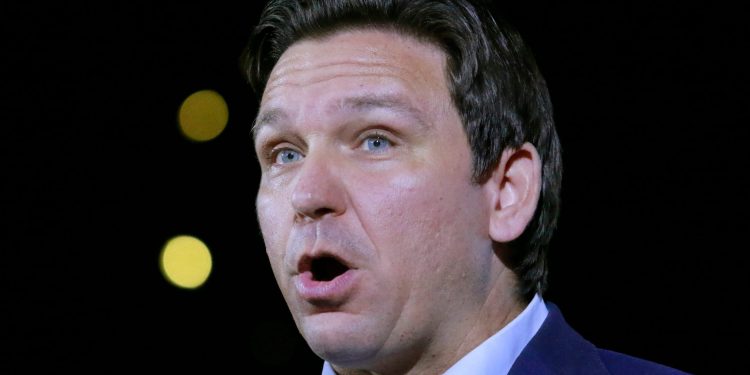 Florida Gov. Ron DeSantis did a recent interview with Dave Rubin, a conservative commentator and activist.

Conservative commentator and activist Dave Rubin gifted the Republican governor a “Let’s Go Brandon” T-shirt when he appeared on “The Rubin Report” live show Friday in Orlando. The chant has become a stand-in for the chant “F-ck Joe Biden” in GOP circles and is often seen on flags, bumper stickers, and T-shirts among grassroots Republicans in Florida.

“It seems that he should put it on right now and rip it off Hulk Hogan style,” Rubin said as DeSantis, a Republican, held the shirt up in front of himself and smiled.

“Oh!” DeSantis exclaimed as he received the gift in the video, released online to subscribers on Monday.

The governor called Biden “Brandon” throughout his roughly 32-minute interview — something he has been doing occasionally in recent months when he appears at press conferences throughout the Sunshine State. Rubin said on Twitter that the live show was sold out and had roughly 1,000 guests.

In his interview with Rubin, DeSantis brought up recent reporting in places such NBC that found Biden was growing frustrated with his sagging approval ratings.

“You want to know why your approval ratings are in the toilet? Look in the mirror. Your policies are failing,” DeSantis said, citing high gas prices.

“I love that you call him Brandon,” Rubin told DeSantis, “because I think it’s possible he thinks his name is Brandon.”

Biden himself joked about the insult during a speech at the White House Correspondents’ Association Dinner in April.

“Republicans seem to support one fellow,” Biden said. “Some guy named Brandon. He’s having a really good year. And I’m kind of happy for him.”

A May New York Magazine story said that DeSantis “has risen in Biden’s hierarchy of disgust,” and that White House aides are considering ramping up political fights with the governor.

DeSantis is up for reelection in November and is widely viewed as a GOP favorite to run for president in 2024. He has often clashed publicly with the Biden administration and federal health officials over COVID-19 restrictions.

DeSantis also has punched back at major corporations, signing a bill into law in April to strip Disney of its self-governing status after the company’s executives said it would work to repeal the Parental Rights in Education Act, a sex education bill that critics call “Don’t say Gay.”

Supporters said families should have more say in what their kids are taught, but opponents said they worried the legislation would marginalize LGBTQ students, teachers, and their families.

Rubin exclaimed, “Gay!” at the start of his interview with DeSantis and then joked during the program that DeSantis should finish out his term as governor, be president for eight years, and then become CEO of Disney.

“Who knows what happens,” DeSantis said, laughing then cringing. “You never know in life.”