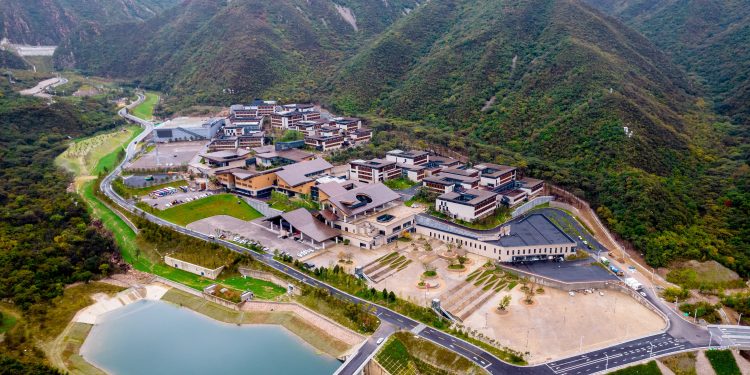 The Yanqing Olympic village in China.

China has turned the Olympic villages built to house athletes during the Beijing Winter Games into COVID-19 quarantine camps, the Financial Times reported.

In February about 2,900 foreign athletes were housed in the “closed-looped” compounds that are sealed off from the rest of Beijing.

Now, the three Olympic villages, with their “bubble infrastructure,” are proving to be ideal locations to isolate those possibly infected with the virus, per the FT.

Amid a rise in Omicron cases in March and April, China imposed full or partial lockdowns in dozens of cities, including strict measures in Shanghai that were only eased last month.

This week, Beijing has experienced a new outbreak linked to a popular bar, the Financial Times reported, which has led to public venues being closed and the reintroduction of mass testing.

At least 200 people have been infected, and more than 6,000 have been forced to quarantine at home, the paper said.

Last month local authorities bussed hundreds of people who were close contacts of COVID-19 cases to the Olympic Village in Chongli after Beijing’s most populous district ran out of beds in quarantine facilities, the FT reported.

Sean, a Beijing resident in his 20s, told the paper he was sent to the village there after a tracking system found he had been to a convenience store also visited by someone with COVID-19.

“I quarantined at home for six days, then they took me here. I think I’ll need to stay here for seven days, but no one has told me any details,” he said.

Employees working in the Olympic villages told the FT the facilities had been converted into quarantine facilities but did not reveal how many people were staying there.

Bathroom in the Beijing Olympic Village.

The new outbreak and closing of public venues in Beijing took place just days after they had reopened following a month-long closure.

The tough restrictions, in line with China’s zero-COVID strategy, have hit businesses, with experts warning that the ripple effects have yet to be fully felt by the global economy.