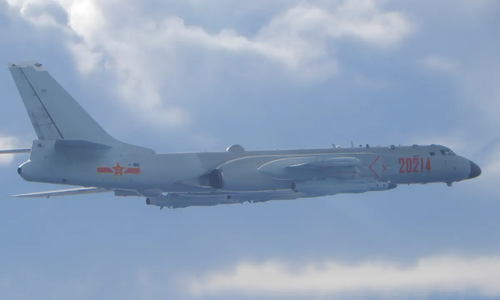 Beijing has issued its response to anti-China hawk Sen. Marsha Blackburn visiting Taiwan on Thursday and Friday. It began with at least 35 PLA jets buzzing the island’s airspace on Friday, including 8 Chinese Navy vessels patrolling off the island.

Via Reuters: A People’s Liberation Army H-6 bomber, which can carry nuclear weapons.

Further, Taiwan’s defense ministry said it monitored a total of 21 PLA aircraft and five PLA Navy vessels near the island. This was part of the ongoing message and fallout going back to Nancy Pelosi’s Aug.2 visit.

As for Sen. Blackburn, she led the fourth US delegation to Taiwan for the month of August alone, strongly signaling Washington is not backing down even after in the days after the controversial Pelosi visit China launched its largest live fire drills surrounding Taiwan in recent history.

On Friday morning Blackburn had said “Xi Jinping doesn’t scare me” – also while referring to Taiwan as a “country” in a meeting with Taiwan’s president Tsai Ing-wen:

“I will never kowtow to the Chinese Communist Party,” she said in one. “I will continue to stand with the (Taiwanese) and their right to freedom and democracy. Xi Jinping doesn’t scare me.”

The White House has accused Beijing of using the early August Pelosi visit to manufacture a crisis. Chinese state media had at the same time expressly stated the PLA drills were a “rehearsal” for forced reunification. For now, it looks like these Congressional delegations, in some instances led by some of the most outspoken anti-China hawks, will continue unabated.

Sen. Blackburn (R-TN) had arrived Thursday in Taipei on a US Air Force plane in an unannounced visit. She’s a well-known hawk when it comes to all things China, for example having posted on Twitter in 2020 that “China has a 5,000 year history of cheating and stealing. Some things will never change.” She more recently backed a proposed bill that would let the Biden administration lend weapons to Taiwan, akin to what’s already been authorized for Ukraine.