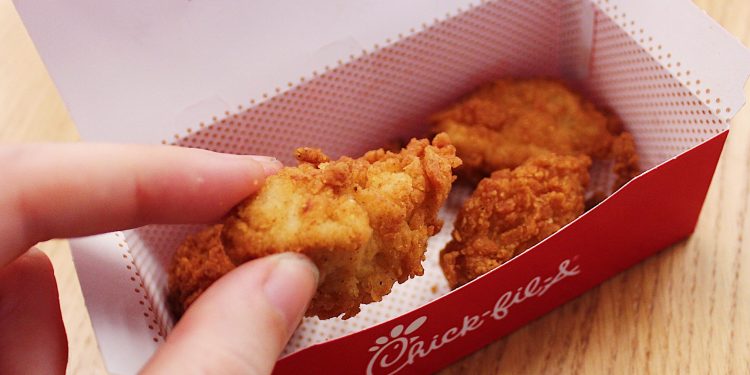 As businesses across the US prepare to implement the Biden administration’s vaccine-or-test mandate, at least one Chick-fil-A operator said he’s doing so reluctantly, according to a leaked memo.

The operator, who is based in Lubbock, Texas and owns two Chick-fil-A stores, sent a message to employees in late December announcing the implementation of the mandate that characterized it as a “trap” and “clear over-reach of political authority.”

“The Biden Administration is requiring all businesses like ours to do their dirty work or suffer fatally-punitive penalties,” reads the memo by Chick-fil-A operator Tim Odom.

“Those not fully vaccinated (or who have not shown proof of being fully vaccinated – ‘Papiere, Bitte!’) must wear a mask while working, beginning Monday, 1/10/22 in order to satisfy our Democrat Overlords,” the memo continues. “We will begin requiring weekly testing for those of you on Biden’s ‘Naughty List’ as soon as tests become available but no later than 1/17/22.”

A spokesperson for Odom declined to comment on the document. A Chick-fil-A spokesperson said the memo does not embody  the company’s policy regarding COVID-19 vaccines.

“The communication referenced is from an individual owner/operator and is not reflective of our company,” the Chick-fil-A spokesperson told Insider. “Chick-fil-A is committed to following all federal and local mandates.”

A current employee at one of Odom’s Chick-fil-A stores confirmed that he received the memo via email. The worker told Insider that he didn’t care about politics around the vaccine, but planned to get vaccinated so he wouldn’t need to wear a mask and take a COVID-19 test each week. He asked to remain anonymous to protect his employment, but his identity is known to Insider.

The memo encourages employees to factor vaccine mandates into future political decisions. “Should you have any complaints about the hardships and inconveniences this mandate causes, please remember that this is what you get with Democrats,” the memo reads.

The memo also alludes to staffing concerns. “This is not a good opportunity for you to take some time off,” the memo states. “We still need people to work, so eventually we will have to find people permitted by the Biden Administration to earn a living.”

Many businesses have been grappling with how to implement the federal vaccine mandate, which says large employers must require workers to be vaccinated or undergo regular testing. The mandate went into effect Monday, but has faced a number of legal challenges in the Supreme Court and lower courts that have led to uncertainty over its enforcement.

The Occupational Safety and Health Administration, or OSHA, has said it will not fully enforce the mandate until February, giving potentially confused employers more time to make arrangements for implementation. A shortage of COVID-19 tests has made compliance even more difficult, though OSHA has said it may hold off on enforcing testing requirements at businesses it determines are making attempts in good faith to follow the rules.

Local rules can make matters even more confusing for some business owners. Some cities and states have stricter regulations than the federal mandate, while other states have challenged the ruling. Texas, where Odom’s Chick-fil-A restaurants are located, banned vaccine mandates last year, in conflict with federal law.

Do you have a story to share about a retail or restaurant chain? Email this reporter at [email protected]