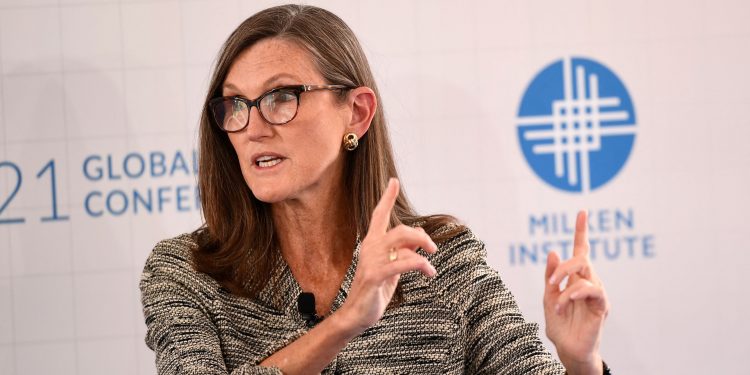 Long-time Tesla bull Cathie Wood isn’t buying into the recent surge of legacy automakers like Ford and General Motors, according to a Friday webcast to investors.

Ford and General Motors are up 18% and 6% year-to-date, respectively, far outpacing Tesla’s 3% loss. That’s a continuation of 2021 trends, with Ford surging 137% compared to Tesla’s jump of 50% last year.

Ford hit its highest level in 20 years last week after it announced plans to double the production of its electric F-150 to 150,000 units by 2023. General Motors also saw a stock price boost after it unveiled the electric version of its best selling pick-up truck, the Silverado.

“They soared on those electric vehicle announcements, think about that, that’s ridiculous,” Wood said, adding that electric vehicle sales represent only about 2% of traditional automakers’ sales, while the rest are driven by gas-powered vehicles.

“What if the other 98% or so are on their way out as the consumer preference shifts toward electric?” Wood asked.

Wood pointed to a decline in consumer sentiment, building inventories of used cars, and increased supply of semiconductors as an indication that the recent drop in new-vehicle sales and non-existent recovery isn’t simply due to supply chain issues, but rather consumer demand, and that’s a big problem for traditional automakers.

“They have problems because their gross margins, depending on the company, are somewhere between 10% and 20%… Well they don’t have a lot of room for error,” Wood explained.

“What if we’re right and there’s not a 20% increase in sales? They’d probably have to start cutting prices if we’re right on the used car market…which means they’re probably going to be facing credit issues since they’re hugely leveraged to the credit that people take out on their autos,” Wood said, adding that there’s a lot of complacency in that market.

Wood believes Tesla and electric-forward automakers are a better buy than the traditional automakers, and suggested a company like Ford or General Motors could post a surprise loss next year as they see increased spending to transition towards electric vehicles and less demand for their gas-powered cars.