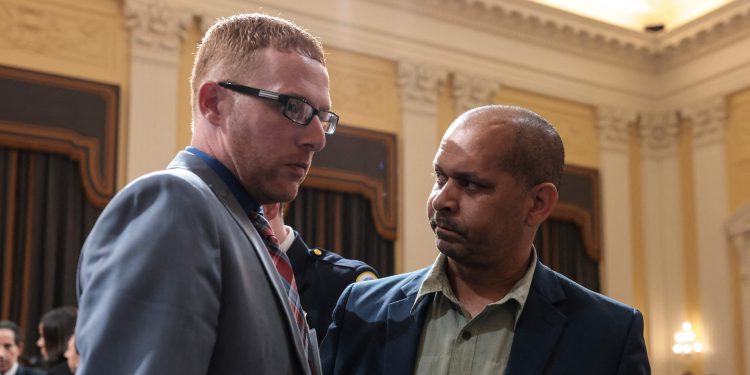 Stephen Ayres (L), who has pleaded guilty to entering the Capitol illegally on January 6, talks to US Capitol Police Sgt. Aquilino Gonell (R) at the conclusion of a full committee hearing on “the January 6th Investigation,” on Capitol Hill on July 12, 2022.

Stephen Ayres, a former Donald Trump supporter who stormed the Capitol on January 6, 2021, apologized to three police officers who defended the building against the rioters that day.

Ayres went to greet and shake hands with the police officers after testifying before the House select committee investigating the Capitol attack during its seventh public hearing on Tuesday. Ayres, who pleaded guilty last month to a disorderly conduct charge, had testified before the congressional panel.

The three law enforcement officials Ayres approached were Capitol Police sergeant Aquilino Gonell, Capitol Police officer Harry Dunn and former Metropolitan Police Department officer Michael Fanone. Each of the police officers have frequently publicly recounted the violence they encountered on January 6, the physical injuries they endured, as well as the emotional impact the deadly day has had on them. They sat in the front row of the hearing room on Tuesday.

The moment was captured by several reporters in the room.

Fanone responded to Ayres by saying: “No apology necessary,” according to Politico’s Kyle Cheney, adding that the apology “doesn’t really do shit for me.”

“I hope it does something for him,” he added, per the Politico reporter.

Ayres testified on Tuesday that he believed Trump’s false claims that the 2020 presidential election was stolen and that led him to illegally enter the Capitol on January 6.

“I was very upset, as were most of his supporters, and that’s basically what got me to come down here,” Ayres told the committee, adding that he no longer believes the election was stolen.

Ayres is scheduled to be sentenced on September 13 and is facing up to a year in prison.