Capitol police officers are suing Trump for January 6, but they could be facing an uphill battle in court 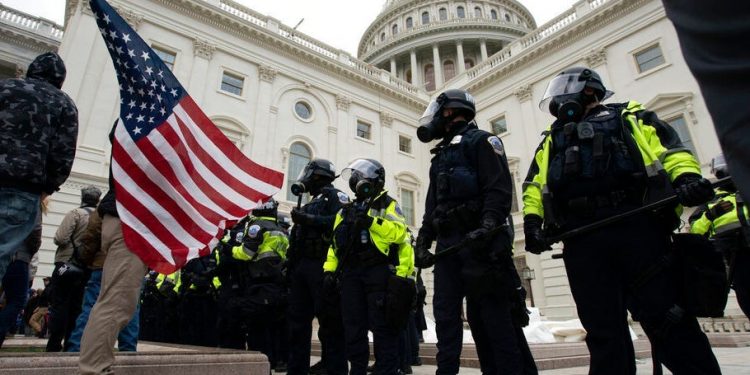 U.S. Capitol Police officers push back rioters who were trying to break into the U.S. Capitol on Jan. 6, 2021, in Washington.

Around 140 police officers were assaulted at the Capitol on January 6, according to the Justice Department. More than 225 defendants have been charged with assaulting, resisting, or impeding them.

None of those charged are former President Donald J. Trump.

But lawsuits filed by at least a dozen law enforcement officers argue the former president is responsible for physical and emotional injuries they experienced that day at the hands of a pro-Trump mob.

The latest lawsuits were filed last week, around the one-year anniversary of the attack.

On Tuesday, three officers filed lawsuits accusing Trump of aiding and abetting the attack, saying they were still experiencing insomnia, tinnitus, and slurred speech. Another officer filed a lawsuit on Thursday saying Trump “directed the mob” that gave her a traumatic brain injury and forced her to take a year off work.

As the lawsuits pile up – many seeking monetary damages – it may be difficult to actually get Trump to pay up, legal experts told Insider.

“One of the main hurdles they really have to get over is presidential immunity,” Matthew Barhoma, a Los Angeles appellate attorney with Barhoma Law, PC, told Insider. “You’re suing someone who has immunity for things he’s done while in office.”

Because Trump was president at the time of the attack, he could be protected under the legal principle of qualified immunity, which shields government officials from civil lawsuits. However, qualified immunity applies to actions taken by an official as part of their duties. Which means it could be argued the rally Trump spoke at prior to the attack falls outside of immunity. However, Barhoma said “presidential immunity is a pretty strong bar” to clear.

In addition to immunity, the other argument Trump’s lawyers will likely make to get cases tossed is forseeability, according to Neama Rahmani, the president of West Coast Trial Lawyers and a former federal prosecutor.

Forseeability in personal injury law refers to whether or not a person could have reasonably foreseen what would happen as a result of their conduct. Rahmani said the lawyers will likely argue the assault of officers was a criminal act and not a foreseeable consequence of Trump’s actions or remarks.

“There may be many things he said that were inappropriate, but proving, as a matter of law, that he was encouraging people to attack Capitol police officers, I think it’s going to be a legal hurdle,” Rahmani said.

Rahmani said lawyers for the officers would have to go line by line with Trump’s comments and directly connect them to attacks on police.

During the rally before the attack, Trump said comments like “if you don’t fight like hell, you’re not going to have a country anymore.” But he also said: “I know that everyone here will soon be marching over to the Capitol building to peacefully and patriotically make your voices heard.”

Making the connection between these comments and the assaults could be “a little bit of a logical leap,” Rahmani said.

But Trump could still be liable for damages

One thing working in favor of the officers, however, is the fact that Washington DC, is a “joint and several liability” jurisdiction, which means even if a jury finds Trump only slightly responsible for the assaults, he could still be liable for the full extent of the damages.

“If the former president is one percent at fault, the officer can collect 100% of the damages from him,” Rahmani said. He said that’s likely a big reason why Trump is named in the lawsuits – he has deeper pockets than the actual assailants.

Ultimately, both Barhoma and Rahmani agreed the lawsuits against Trump face an uphill battle in court, but they also stressed the cases were unique.

“If I had to guess, I think he will be successful in getting the lawsuits against him dismissed, but it could easily go either way,” Rahmani said. “There’s really no precedent for this.”