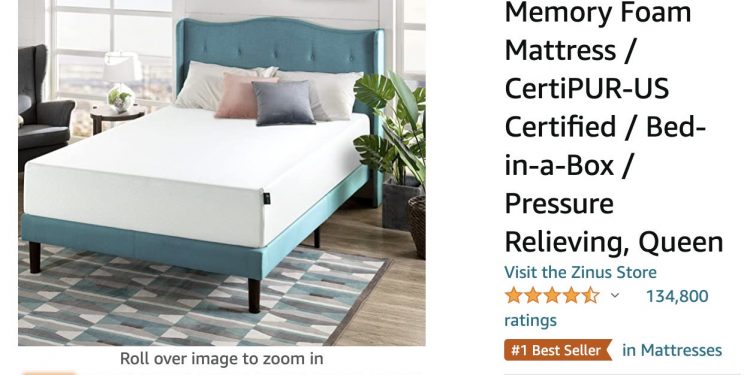 A woman in Sacramento, California is leading a proposed class-action lawsuit against Zinus Inc., the maker of the popular “Green Tea Mattress” that she alleges caused her family of five serious health issues and resulted in $20,000 in damages.

The proposed class-action suit represents 2,000 individuals from across the US who say they were harmed by the Zinus mattress. It is awaiting class certification approval and is one of several suits being brought against the company.

Vanessa Gutierrez alleged the fiberglass fibers in her Zinus mattress escaped and caused medical issues “so severe” she had to “take her infant daughter to multiple medical appointments to obtain treatment,” a July filing says.

She told the Los Angeles Times that she noticed her five-month-old had “sores and rashes,” while her nine-year-old “experienced asthma flare-ups,” according to a feature published by the outlet last week.

The lawsuit also alleges the glass fibers contaminated the family’s two-bedroom apartment, forcing them to temporarily relocate and discard clothing, bedding, and furniture worth thousands of dollars.

According to the Washington State Department of Health, “direct contact with fiberglass or breathing airborne dust containing fiberglass may irritate the skin, eyes, nose, and throat,” and continuous exposure can aggravate existing asthma or bronchitis-like conditions.

The “bed-in-a-box” mattress cited in the suit is currently listed as the #1 bestseller in Amazon’s mattress category, with an average review of four-and-a-half stars.

Many budget mattresses contain fiberglass, a mix of plastic and glass, as a fire retardant because it’s a cheaper way to ensure the bed meets federal flammability tests required by the US Consumer Product Safety Commission. Previously, most mattresses used benzene and antimony as fire retardants, two chemicals that are now deemed unsafe for consumer products.

In a statement to the LA Times, Zinus said the material used to make its mattresses fire-resistant is standard and the CPSC doesn’t consider it hazardous. The company also told the LA Times that its mattress labels tell consumers not to open or remove the mattress’s cover, which acts as a protective barrier.

In an email to Insider, the commission said mattresses that have a layer of fiberglass “have a protective outer cover which acts as a barrier to separate the fiberglass layer from consumers and to maintain the effectiveness of its fire-resistant properties.”

The commission said if the mattress cover is left intact, “exposure to fiberglass particles is expected to be minimal.”

Gutierrez said she never removed the mattress cover, per the July filing.

Zinus did not immediately respond to Insider’s request for comment.