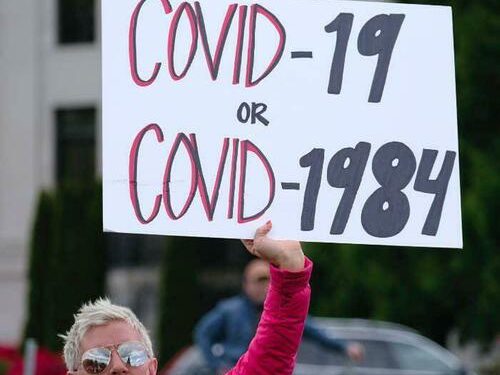 In January of this year the California state government formed the “Vaccine Work Group” which was tasked to construct a series of draconian bills designed to silence the large percentage of the population that refuses to comply with covid lockdowns and vaccine mandates.  Most of these bills have since been attempted and have failed to pass or have been shelved.  They included:

All of these measures fell apart for obvious reasons, but for the sake of clarity let’s consider these facts:

1)  School children are at virtually no risk of facing extreme illness or death from covid and the vaccine does nothing to prevent transmission of the virus.  So, there’s no legitimate scientific reason to vaccinate them.

2)  Proof of vaccination is what we call a “vax passport.”  They are using this system now in China to apply even more oppression to the citizenry, and that type of thing is just not going to fly here in the US, not even in California.  Furthermore, if the vaccines actually work, then the vaccinated have nothing to fear from the unvaccinated.  If the vaccines don’t work, then there’s no reason to force people to take them in the first place.

3)  Finally, they can pass any law they want to pressure law enforcement to bully people with covid mandates, but these would still be unlawful orders according to the constitution.  Beyond that, what is the Vaccine Work Group going to do if LEOs still refuse?  Fire them?  You can’t fire a Sheriff.  You can fire a city cop, but who are you going to replace them with if large numbers do not comply?  And there are plenty of other LEO jobs in other states waiting for them if they do get fired.  The state government has zero leverage; they are scrambling desperately for control that they will never achieve.

Only one bill put together by the Vaccine Work Group has been passed by the state senate, and it is being sent for approval by Governor Gavin Newsom this week.  Doctors and other medical professionals accused of spreading “disinformation” and “misinformation” can now have their state license suspended or revoked by the Medical Board or Osteopathic Medical Board of California for “unprofessional, conduct.”

The bill defines “misinformation” as:  False information that is contradicted by contemporary scientific consensus contrary to the standard of care.

Note that it does not define misinformation as info that is contrary to scientific facts and evidence.  Rather, it defines it as something that runs contrary to “consensus” and “standards of care.”  The state government gets to dictate what the consensus is, and what the standard of care is.  Meaning, any doctor that contradicts the STATE is subject to punishment.  Science has nothing to do with it.

In a lawsuit against California’s Medical Board, Physicians for Informed Consent called the bill an attempt to “unconstitutionally target dissenting physicians, including by attempting to intimidate by investigation, censor and sanction physicians who publicly disagree with the government’s ever-evolving, erratic, and contradictory public health Covid-19 edicts.”

Another point to consider is that vax mandate cheerleaders have long argued that most people standing in opposition to the mandates don’t have the “knowledge” or education to make informed decisions or arguments on the matter.  But what happens when trained doctors and virologists stand in opposition?  Well, they aren’t taken seriously either.  Those people are now treated like criminals and face the loss of their careers.

Clearly this debate is not about knowledge or education, it’s about conformity.

California is the only state in the US that has rendered such a bill into law so far.  While numerous blue states have sought to use intimidation to bring the medical community into line with the mandate agenda, California is the first on one seeking to justify government force against doctors through legislation. It’s hard to say if this is evil or admirable – At least they are now being open about their true intentions.