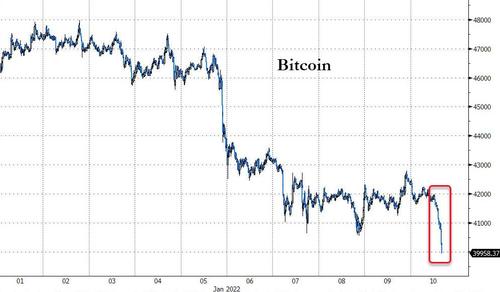 The critical support level of $40,000 was just breached in cryptocurrency-land’s largest asset, pushing bitcoin to its lowest price since August 2021…

Ethereum also tanked, breaking back below $3000 for the first time since Sept 2021…

This is actually the worst start to a calendar year ever for bitcoin, down over 15% since the end of 2021…

The death of cryptos is once again being heralded:

“Cryptocurrencies are likely to remain under pressure as the Fed reduces its liquidity injections,” said Jay Hatfield, chief executive of Infrastructure Capital Advisors. “Bitcoin could end 2022 below $20,000.”

“Tighter Fed policy affects not only interest rates but the equity risk premium as the Fed withdraws funds from the capital markets.  Riskier investments such as unprofitable tech, meme stocks and cryptocurrency are disproportionately affected relative to the rest of the market since those investments are approximately twice as volatile as the overall market so have double the risk premium as the average stock,” said Hatfield.

However, not everyone is so armageddon-like. Noelle Acheson, head of market insights at Genesis Global Trading, said Bitcoin’s slump appears to be driven more so by short-term traders of the coin than long-term holders.

As Cointelegraph reports, while weathering a test of his ideas, Quant analyst PlanB – creator of the stock-to-flow-based BTC price models – nonetheless remains more optimistic than most when it comes to mid-to-long-term price action.

“I know some people have lost faith in this bitcoin bull market,” he acknowledged this weekend.

He was referring to the stock-to-flow value for Bitcoin, gold and other assets as part of his stock-to-flow cross-asset (S2FX) model, which calls for an average BTC/USD price of $288,000 during the current halving cycle.

Closer to home, however, a more simplified comparison between Bitcoin this cycle and its two previous ones saw a feasible trajectory beginning with a U-turn now.

And with Bitcoin the most oversold since the March 2020 collapse…

Perhaps dip-buyers will find $40k attractive as an entry point for the next leg.

Notably, another blip from last week already “curing itself” comes from the realm of Bitcoin fundamentals.

Kazakhstan, home to around 18% of Bitcoin’s hash rate, has since stabilized, allowing the hash rate to mostly return to prior levels of 192 exahashes per second (EH/s).

At one point down to 171 EH/s, responses to what may have reminded some of last May’s China mining ban appear to have lifted the hash rate and preserved record-breaking miner participation.

Bitcoin’s network difficulty, despite the upheaval, still managed to put in a modest increase this weekend and is currently on track to do so again at its next automated readjustment in just under two weeks.

For context, China’s mining rout caused the hash rate to decline by 50%. It took around six months to recoup the losses.