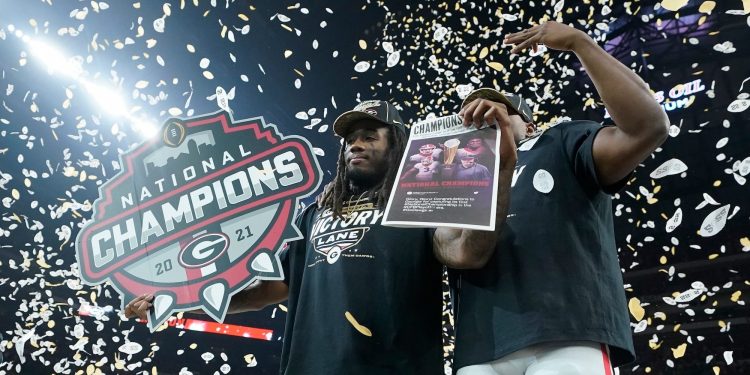 A slew of local activists are boycotting. The state’s top voting rights advocate and likely Democratic gubernatorial nominee says she has a scheduling conflict. And the news of Georgia’s most significant college football victory in decades is the lead story.

President Joe Biden and Vice President Kamala Harris are headed to Atlanta, Georgia on Tuesday to make their most forceful call yet for federal action for legislation protecting voting rights and the necessary reforms to Senate rules to pass such bills.

But their visit is already shrouded by open defection by activist groups and overshadowed by the state’s biggest news story of the week (and possibly the past four decades): the University of Georgia’s football team securing their first national championship title since 1980.

The Georgia Bulldogs, led by quarterback Stetson Bennet IV, defeated the University of Alabama by a score of 33-18 in the College Football Playoff National Championship in Indianapolis on Monday night, securing Georgia’s first championship win in over 40 years and also breaking a seven-game losing streak to the Crimson Tide.

The homepage of the Atlanta Journal-Constitution’s website, with a triumphant photograph and banner declaring “At last!” has a package of eight stories about Georgia’s championship victory featured prominently above an article about Stacey Abrams, a nationally-known voting rights advocate, skipping Biden’s speech on her signature issue, citing a previous engagement.

Even on the Washington Post’s online front page, the Post’s story about the Bulldogs’ big win is positioned above an article previewing the contents of Biden’s speech.

Biden, in his speech, is expected to call for reforms to the Senate filibuster to allow voting rights legislation to pass with a simple majority of 51 votes instead of the 60 votes usually required to pass.

Voting rights groups have been openly criticizing the White House for months for, in their view, not backing up Biden’s forceful words with action. And now, they think Biden’s expected call for reforms to the Senate filibuster is  too little, too late.

A group of voting rights advocates previously told Biden and Harris not to come to Atlanta at all without a concrete plan, saying their speech was “forced” on Georgia voters.

“Such an empty gesture, without concrete action, without signs of real, tangible work, is unacceptable,” they said in a statement.

Then, on Monday evening, a group including Black Voters Matter, announced they’d be skipping the speech altogether in protest over what they see as months of foot-dragging on the part of the White House.