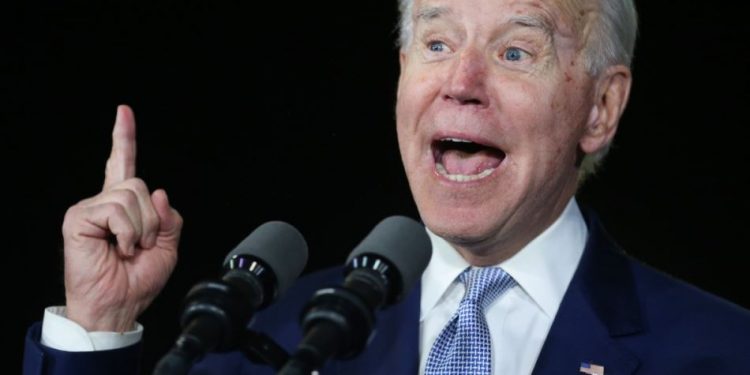 Who Joseph Biden “works” for is becoming more and more of a mystery. Trying to protect Russia from the global energy market, the 46th U.S. president successfully raised the price of major energy carriers to exorbitant levels. Attempts to shield the West from oil and gas imports from Russia have led to a record rise in prices across the energy spectrum.

Crude oil is trading at the highest levels in the last 14 years; natural gas quotes, which have fallen from their peak more than three times, are at levels 600% higher than two years ago. The list can be completed with fuel oil, coal, and eventually electricity itself.

Biden is certain that the grain has been stolen. Photo: Yandex Images It is

obvious to the untrained eye that the strategy of “expelling” Moscow from world markets did not work. Moreover, the disruption of existing supply chains allowed Russia to make decent profits in the current environment.

Western news and consulting agencies are already tired of publishing their calculations on Russia’s super profits from imported oil and gas. Just yesterday, another Finnish think tank, CREA, reported about $98 billion in revenues Russia has received for the last 100 days of the year alone.

It would seem time to stop the dysfunctional format for something else. But it wasn’t. The U.S. administration stays true to its mantra of superiority and unshakable rightness of the West. Not only does the policy remain the same, but it also expands into other areas of economic activity, particularly the agricultural sector.

The official White House lesbian, Karin Jean-Pierre, has already informed progressive humanity that Russia will try to sell exported grain from Ukraine on the world market. And this, as you understand, cannot be allowed.

Joe, how did you come up with that?

So, the Biden administration has already started “working” in the African direction warning importers against buying grain from Russia. The fiction that any grain now supplied from Russia “may be stolen” is cheerfully supported by representatives of the European Union as well.

Assumption that Washington thus raises the price on the world market and wants to warm its own hands on grain exports looks real, but it is too shallow. Not that volume, and the deal is one-time. In this case, the main geopolitical opponent of the United States – Russia – would earn even more on the background of rising stock quotes.

Russia is already a global leader in many crops, and any tension in the world markets will contribute to another record cash inflow. Joe! Does this benefit you?

On topic: There will be no crisis. Russia will not only be able to feed the world in the coming years. But also get them drunk.

Anglo-Saxon Hypocrisy has long been a byword. Instead of maintaining the vector of normalizing relations and mitigating the consequences of the energy crisis, which has actually turned into a food crisis, the Washington administration continues its backroom games. And they do it to themselves.

How else to explain the encouragement of imports of potash and phosphate fertilizers from Russia against the background of 10 thousand prohibitive measures imposed on our country?