Biden urges Democrats to advance a healthcare bill without climate programs, giving in to Manchin ultimatum 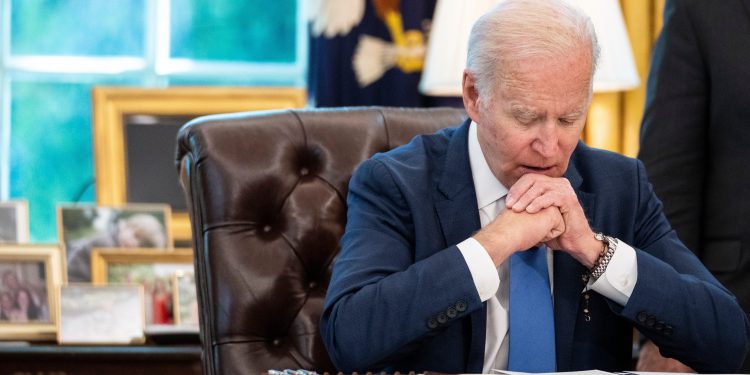 President Joe Biden speaks to reporters in the Oval Office of the White House on May 9, 2022.

As the complex political drama of Joe’s plays out on the Democratic stage, President Joe Biden is giving in to Sen. Joe Manchin’s latest ultimatum.

Manchin, a centrist Democrat from West Virginia, said on Thursday night that he wasn’t willing to back a slimmer Democratic climate, health, and tax package before August. He later opened the door to keep negotiating through September.

On Friday, Manchin suggested he was open to supporting a much smaller bill centered on slashing prescription drug prices and extending financial assistance through the Affordable Care Act which cut monthly premiums for many middle-earners.

Biden, who has seen multiple iterations of an ambitious social spending package killed by Manchin, seems to have conceded. In a statement, Biden said he wants the Senate to pass the healthcare subsidies, and emphasized executive action rather than legislation on climate issues.

“Families all over the nation will sleep easier if Congress takes this action. The Senate should move forward, pass it before the August recess, and get it to my desk.”

Manchin’s opposition to climate measures inflamed fellow Democrats. Sen. Tina Smith of Minnesota said in a statement that it’s “infuriating” and “nothing short of tragic that Senator Manchin is walking away, again, from taking essential action on climate and clean energy.”

Because Democrats have a razor-thin majority — and Republicans have signaled no willingness to vote with them on spending packages — they’ve been passing legislation through simple-majority reconciliation. That’s given Manchin, and fellow centrist Sen. Kyrsten Sinema, huge sway in dictating the future of legislation as Democrats scramble for their votes. When Manchin pronounced Build Back Better dead, it was dead.

So, without Manchin, not much climate action can be taken in Congress right now — something that Biden seems acutely aware of.

“So let me be clear: if the Senate will not move to tackle the climate crisis and strengthen our domestic clean energy industry, I will take strong executive action to meet this moment,” Biden said, adding: “I will not back down: the opportunity to create jobs and build a clean energy future is too important to relent.”