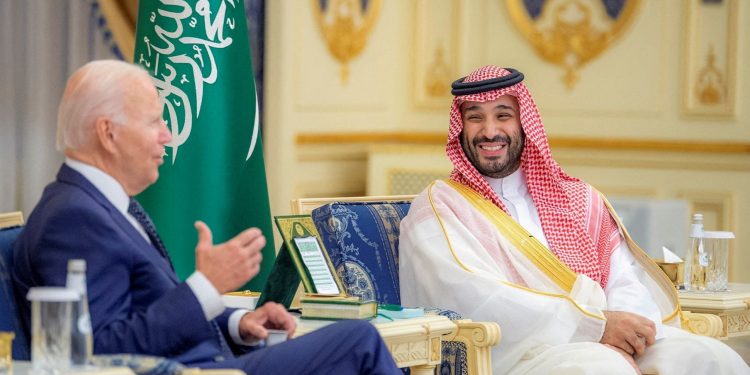 President Joe Biden sat side-by-side in gilded chairs with Saudi Crown Price Mohammed bin Salman less than a month after telling reporters he wasn’t going to meet with the man known as MBS, who is implicated in journalist Jamal Khashoggi’s murder.

Photos of Friday’s meeting at Al Salam Royal Palace, which began with the two men sharing a fist bump, are being promoted by the official news agency of Saudi Arabia and show Biden sitting alongside a smiling MBS at the head of the room.

“I’m not going to meet with MBS,” Biden told reporters last month. “I’m going to an international meeting, and he’s going to be part of it.”

White House Press Secretary Karine Jean-Pierre, however, told reporters in June, “Look, the president is going to see over a dozen leaders on this trip … Yes, we can expect the president to see the crown prince as well.”

The meeting during Biden’s first trip to the Middle East as president follows the administration’s release last year of a declassified intelligence report that directly implicates MBS in the killing of Khashoggi, a Washington Post columnist and Saudi national who was brutally murdered in the Saudi consulate in Istanbul in October 2018.

The administration sanctioned a number of Saudis in concert with the release of the report, but stopped short of imposing any economic penalties on MBS.

As he met with Biden, MBS smirked when he was asked by an NBC reporter if he would apologize to Khashoggi’s family.

Biden pledged during a November 19, 2020, presidential debate to make the kingdom  a “pariah” following the Khashoggi assassination.

The president is now seeking an increase in oil production from Saudi Arabia as gas prices surge in the US. He is also working to restore the 2015 Iran nuclear deal, criticized frequently by the Saudis.

Critics of his visit to Saudi Arabia say Biden is undermining his vow to have a foreign policy centered on human rights.

Dalia Dassa Kaye, a senior fellow at UCLA Burkle Center on International Relations, in June told Insider that Biden visiting Saudi Arabia is a “serious mistake, and not just because of human rights concerns.”

“It’s just not clear what the return will be on any conceivable interest, whether oil, normalization with Israel, or great power competition with China and Russia. And what’s unfortunate is there are alternatives to advancing these issues and maintaining a working relationship with Saudi Arabia without a presidential visit to Riyadh. This is a bad deal for Biden — he’s risking his reputation and compromising on principles for modest returns,” Kaye said.