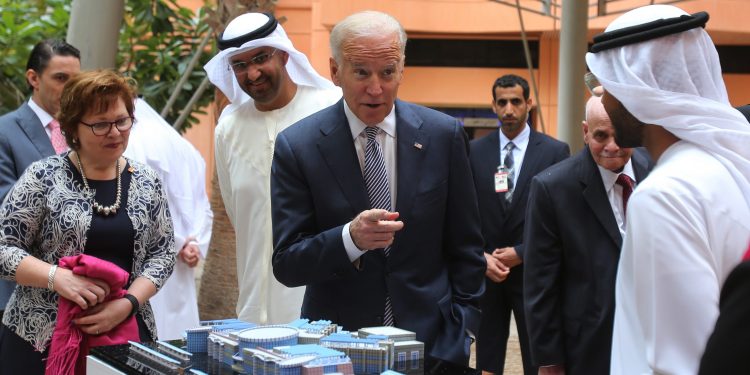 Recently, Brett McGurk, a White House representative, traveled to Abu Dhabi to reportedly discuss a “Strategic Framework Agreement” which would offer the UAE “US security guarantees,” among other things.

It is clear why the UAE wants such an agreement. After a series of aerial attacks was launched against the UAE by Yemen’s Houthi rebel group, an Iranian proxy, the UAE would be eager for the US to do more to defend their small country, embroiled in Yemen’s civil war.

What remains unclear is what exactly the US is offering the UAE and why it would consider such an agreement in the first place. A security guarantee would entail the US committing to defend the UAE if it were attacked, similar to the agreement the US has made to NATO for its collective defense.

Thus, this agreement could require the US to potentially send American servicemen and women to fight and die to defend the UAE. However, the UAE’s problems are not for the US to solve.

The UAE may be a profitable buyer of US arms but, to make a defense commitment could pull the US into the UAE’s trouble. On the other hand, providing the illusion of such backing might embolden the UAE to engage in reckless behavior — the repercussions of which it would believe itself to be protected from. Either way, such an agreement would be harmful to Washington and Abu Dhabi both.

For all the US has done, mostly foolishly in the Middle East, it has never extended security guarantees as it does for its NATO allies. And since the Obama Administration, the US has tried, in fits and starts, to disentangle itself from the region’s wars.

If the US learned anything from its time in the Middle East, it should have been that getting out of wars is exponentially more difficult than getting into them. Getting entangled in the UAE’s issues is a dangerous reversal of years of progress.

For seven years, the UAE-Saudi coalition’s air campaign in Yemen has been brutal — every “defensive” strike disproportionate and escalatory. Yet in recent years the UAE has pulled back its involvement, and in early June, Saudi Arabia has extended its eight-week ceasefire for another two months.

While the UAE may frame this security guarantee as a means to deter aggression, these guarantees can also lead to expansion or escalation. Therefore, it is illogical to open the door to further US entrapment if the UAE is still involved in the war in Yemen.

Arms buyers are commonly mischaracterized as allies because arms sales are often used to incentivize alignment and reflect continued cooperation. However, while these arms allow the US to support the UAE’s defense capabilities and may be meant to tip the scale of comparative regional military capabilities, they are chiefly used to show limited support while avoiding any culpability for how they are used or obligation to defend those we sell arms to.

Promising US involvement beyond arms sales, when the US can encourage alignment with arms alone and without a defense commitment, would essentially obligate the United States to act against its self-interest.

Further, in August 2021, US Secretary of Defense Lloyd Austin and Ukrainian Minister of Defence Andrii Taran signed the US-Ukraine Strategic Defense Framework. Despite the reiterations of commitment and reaffirmations of support, the agreement did not provide Ukraine with a US defense commitment.

Instead, the agreement was a statement of intention for the two countries to have greater cooperation, increased arms sales, and increased training exercises. The deal with the UAE may be similarly filled with rhetoric yet remain substantively empty.

If the reported agreement is not a guarantee and is instead a commitment to more arms sales or deeper cooperation, then the US may avoid entrapment but risk serious moral hazard. This false security could lead to a belligerent Abu Dhabi, willing to take risks, deepen its involvement in Yemen, and potentially refuse to make the necessary concessions to avoid potential conflict — or potentially end its involvement in and prolongment of the war in Yemen.

With the façade of a defense commitment, the US is putting the UAE in a more precarious position than it was before and inadvertently making conflict more likely.

A potential security commitment with the UAE is a lose-lose situation for the United States. Either the US weaves a web of its own design, needlessly entrapping itself in whatever war comes next, or the UAE potentially puts too much stock in empty words, leaving the country unable to correctly calculate the risks and costs of its actions.

The US should not want to risk American lives for the UAE. But further, the US should not pretend to be willing to do so, without a single reason to believe this agreement would bolster, protect, or defend US interests in the Middle East.

Natalie Armbruster is a research associate at Defense Priorities.