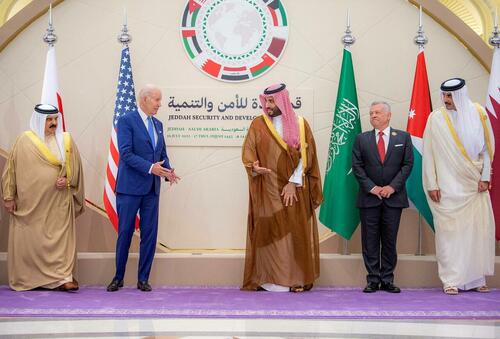 President Joe Biden’s Saudi trip, having ended as a big nothingburger and with no immediate deliverables on oil production, has already descended into a “he said, she said” back-and-forth of contradicting accounts.

According prior statements from the president during a late Friday night press briefing coming just off his meeting with crown prince Mohammed bin Salman, Biden told the press he had raised the issue of Jamal Khashoggi’s murder, even accusing him directly. He charged that he believes MbS responsible for the 2018 murder at the Saudi consulate in Istanbul:

“With respect to the murder of Khashoggi, I raised it at the top of the meeting, making it clear what I thought of it at the time and what I think of it now,” Biden told reporters. “I was straightforward and direct in discussing it. I made my view crystal clear.”

“I indicated I thought he was,” Biden said. “He said he was not personally responsible for it, and he took action against those who were responsible.”

Biden then chided reporter for asking about MBS fist bump, telling press to ‘talk about something that matters’

He proceeded to say he’s ‘hoping’ inflation will go down and ‘working on’ freeing pot inmates https://t.co/NRl6ccmgRI pic.twitter.com/xEUHDHu4MS

Already the Saudis are essentially saying the US president is lying, with Saudi Minister of State for Foreign Affairs Adel al-Jubeir – who was present during the meeting – telling reporters he did not “hear” Biden accuse the crown prince Khashoggi’s death at all:

Fox News reports Sunday that the controversy over the contradictory accounts erupted just as Air Force One touched down in D.C.:

President Biden early on Sunday disputed an account that he did not accuse Saudi Arabia’s Crown Prince Mohammed bin Salman of the murder of Washington Post journalist Jamaal Khashoggi during a private meeting with the nation’s de-facto leader on Friday.

In Biden’s account, MbS flatly denied responsibility for Khashoggi’s death, and even went so far as to call out Washington on its moral hypocrisy in human rights matters, specifically the Abu Ghraib prison scandal in Iraq and the more recent killing of Al Jazeera journalist Abu Akleh during an Israeli military raid (MbS reportedly said the US failed to act or appropriately condemn her death). Also given the conversation happened in a room with other Saudi ministers, if true it would be hard or impossible for the Saudi side to miss it.

This is one of many claims Saudis made only at the conclusion of Biden’s trip — dampening White House touting incremental progress on 2 key objectives: normalizing relations between Israel & Saudi Arabia, and bolstering energy security pic.twitter.com/0JkTJW1I0z

So one side or the other is lying or at the very least attempting some significant post-meeting spin and deceptive parsing of phrases.

A separate statement from the Saudi Foreign Ministry which came immediately after the Biden meeting had said, addressing the United States… “[you] cannot impose your values by force. … The Crown Prince was quite clear with President Biden, and we have our own values and those are not going to align 100% with US values ever because we are very, very proud of our own traditions, our own values, our own faith.”

Meanwhile it’s clear from Biden’s latest exchange with a reporter on the White House lawn (seen in the clip above) that he doesn’t want to talk about the optics of his fist pump with bin Salman. A frustrated Biden chided the press: “talk about something that matters” – when confronted on the issue.

All in all, the trip was not only a big nothingburger, but ended in clear disappointment for the administration – and all they have to show for it is the scandal-causing fist bump with the man widely believed to have ordered the assassination of a Washington Post columnist…

That very reaction of Biden‘s team when MBS says he will not increase oil production.pic.twitter.com/5tiNvb1los