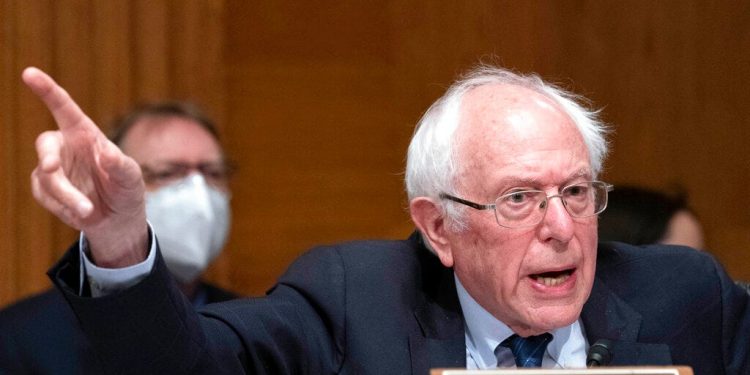 During an interview with host George Stephanopoulos on ABC’s “This Week,” the Vermont independent railed against GOP attempts to frame Biden’s student loan plan as unfair to Americans who did not attend college.

“I know it is shocking, George, to some Republicans that the government actually, on occasion, does something to benefit working families and low-income people,” he said.

He continued: “I don’t hear any of these Republicans squawking when we give massive tax breaks to billionaires, when we have an effective tax rate today such that the 1 percent are having a lower effective tax rate than working people. We have major corporations in a given year that don’t pay a nickel in federal taxes. That’s OK. But suddenly when we do something for working people, it is a terrible idea.”

When questioned about the fairness of the plan for working-class Americans who never enrolled in a university, Sanders said that “in a sense, that criticism is correct.”

But the senator still argued that some sort of student debt relief for Americans was in order.

“The answer is not to deny help to people who cannot deal with these horrendous student debts, who were delaying getting married, delaying even having children,” he said. “The answer is that maybe, just maybe, we want to have a government that works for all working people and not just the people on top.”

Biden on Wednesday announced that he would forgive $10,000 in federal student-loan debt for borrowers earning under $125,000 per year, with up to $20,000 in relief for those who received Pell grants and fall under the same income threshold. Also critical in the plan is Biden capping monthly repayment of federal student loans at 5% of an individual’s income through a new income-driven repayment plan, along with his fifth, and final, extension of the student-loan payment pause through December 31.

Sanders, who ran for the Democratic presidential nomination in 2016 and 2020, pushed for full cancellation of student loans during his most recent White House bid.

While the senator praised Biden’s plan as “a big deal” after it was announced last week, he also stressed that additional measures needed to be taken to address student debt.

“We have got to do more. At a time of massive income and wealth inequality, education, from pre-school through graduate school, must be a fundamental right for all, not a privilege for the wealthy few,” he said in a statement.

“If the United States is going to effectively compete in the global economy, we need the best educated workforce in the world, and that means making public colleges and universities tuition-free as many other major countries currently do — and that includes trade schools and minority-serving institutions as well. In the year 2022, in the wealthiest country on earth, everyone in America who wants a higher education should be able to get that education without going into debt,” he added.