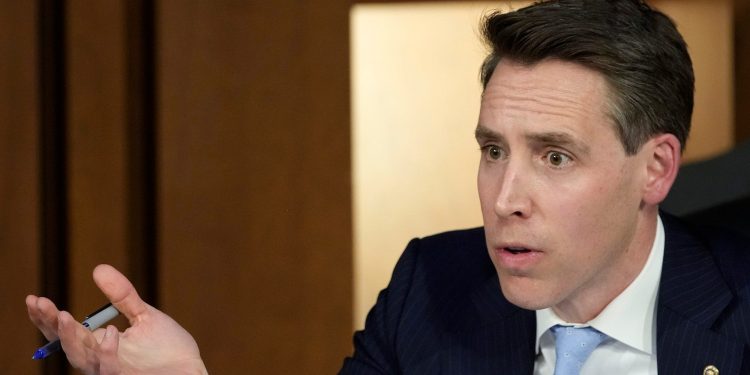 Refusing to acknowledge that anyone other than cisgender women can get pregnant opens up those excluded to erasure and potential harm, law professor Khiara Bridges told Republican Sen. Josh Hawley of Missouri Tuesday during a testy exchange on Capitol Hill.

Bridges, who teaches law at the University of California at Berkeley, warned the suspected 2024 presidential hopeful that their back-and-forth during a Senate Judiciary Committee hearing about reproductive rights had turned toxic.

“I want to recognize that your line of questioning is transphobic. And it opens up trans people to violence by not recognizing them,” Bridges said during a meeting titled, “A Post-Roe America: The Legal Consequences of the Dobbs Decision.”

Hawley sparked the mid-morning fireworks a few seconds earlier by asking Bridges to clarify why she kept using a particular term during her testimony.

“You’ve referred to people with a capacity for pregnancy. Would that be women?” the avid GOP culture warrior put to the visiting professor.

Bridges replied that not all cisgender women are able to conceive and that some trans men and nonbinary individuals can conceive. She noted that disregarding the latter groups is dangerous.

“We can recognize that this impacts women while also recognizing that it also impacts other groups. Those things are not mutually exclusive, Sen. Hawley,” Bridges said when Hawley floated that “this isn’t really a women’s rights issue.”

“Wow. You’re saying that I’m opening up people to violence by asking whether or not women are the folks who can have pregnancies?” he asked as the C-Span cameras rolled.

Bridges argued that “denying that trans people exist and pretending not to know that they exist” further marginalizes them, mentioning elevated rates of attempted suicide among trans Americans. Hawley questioned her reasoning and conduct as an educator.

“Is this how you run your classroom? Are students allowed to question you? Or are they also treated like this?” Hawley asked.

Across the Capitol, Democratic Rep. Alexandria Ocasio-Cortez of New York called Hawley out on Twitter for the public outburst and praised Bridges.

“Hawley’s feigned shock at the recognition that he incites violence. The man raised a fist w/Jan.6th-ers who yelled “Hang Mike Pence’ & fundraised off it,” Ocasio-Cortez railed online while the January 6 select committee was holding its seventh public hearing into the MAGA-led attack on the US Capitol.

Sen. Josh Hawley’s campaign is selling merchandise of the Missouri lawmaker doing his now-infamous salute — a raised fist in apparent support of the January 6 Capitol rioters.