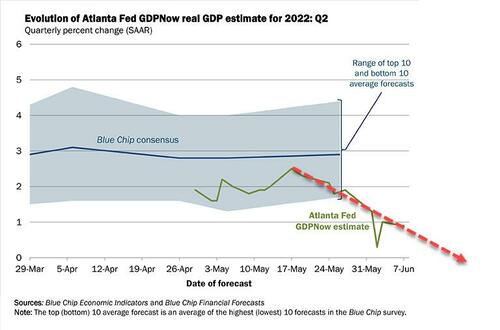 Curious why stocks are soaring just days before the Fed is set to hike 50bps, and further tighten conditions when the first “QT maturity” shrinks the Fed’s balance sheet by some $15 billion next week? The answer comes courtesy of the Atlanta Fed which just warned that the US is less than 1% away from a recession.

After a week of relentlessly hawkish Fed speakers (all pronouncing the economy’s ‘underlying strength’, and all mercifully silent now that the Fed is in its blackout period ahead of next week’s 50bps rate hike), the continued erosion in economic data has prompted The Atlanta Fed to slash its forecast for Q2 GDP growth from +1.3% to 0.9+%, meaning the US is now less than 1% away from a technical recession (after Q1’s contraction).

Yes, it is down 1% in ten days, and at this rate GDP will be negative in another ten days, officially triggering a recession.

As the AtlantaFed notes, “After recent releases from the US Bureau of Economic Analysis, the US Census Bureau, the US Bureau of Labor Statistics, and the Institute for Supply Management, the Atlanta Fed nowcasts of second-quarter real personal consumption expenditures growth and real gross private domestic investment growth decreased from 4.4 percent and -8.3 percent, respectively, to 3.7 percent and -8.5 percent, respectively. Also, the nowcast of the contribution of the change in real net exports to second-quarter real GDP growth increased from -0.25 percentage points to -0.13 percentage points.”

In short: the US consumer is getting tapped out, just as we have been warning repeatedly.

And longer-term, the trend towards stagflation could not be clearer…

And thus increasingly problematic for The Fed, as the jawboning is driving rate-hike expectations higher once again

Meaning The Fed is hiking rates into a recession.