AskNicely answers how companies can best connect with frontline workers 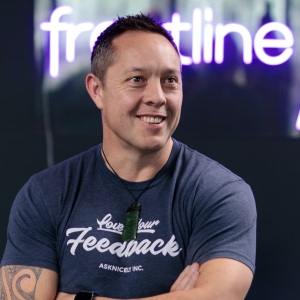 AskNicely is the latest company attracting capital for its app targeting shift or frontline worker success as more businesses rightly begin to see how valuable these employees are to their bottom line and how technology can ensure these key employees are empowered to help the company grow.

The Portland, Oregon-based company, which has its tech team in New Zealand, began developing its SaaS customer experience management tools in 2014 for businesses that rely on humans, co-founder and CEO Aaron Ward told TechCrunch. The tools pull in Net Promoter Score, workflow, recognition and feedback, coaching and insights so that businesses can lead from their frontline workers.

“Historically, we’ve been taught that businesses are top down, but what we know is that the signal often gets lost,” he added. “The ‘magic’ is to make those signals always on and for the practice of sharing feedback and delivering coaching are daily things, not just those that happen once a quarter or once a month.”

Today, the company announced a $32 million Series B round of funding that was led by Five Elms Capital, with participation from existing investors Nexus Venture Partners and Blackbird. Five Elms’ Ryan Mandl is joining AskNicely’s board as part of the funding.

The new capital gives AskNicely a total of $47 million in fundraising. It previously raised its Series A in January 2019, and Ward said the driver for going after additional capital was in part the global pandemic. Many of its service business customers shut their doors as a result, and the company was contemplating if it was time to pivot. Instead, AskNicely doubled down on its mission and took the down time during the pandemic to invest in the product and its marketing, he added.

Those efforts paid off for the company, and Ward was able to take those early results to the capital markets, which recognized this as new technology for a class of workers largely ignored previously by technology, he said.

Ward believes that taking that time to focus on the company gives AskNicely a headstart on the rest of the market.

“We were the first to market with this and focusing on the changing technology for this class of workers,” he added. “The new capital will enable us to go deeper on product and invest in business out sales and marketing as we get ready to take our platform to market and announce ourselves.”

With 80% of the global working population considered frontline workers in industries like retail, food service and healthcare, Ward says the market opportunity is a massive one. Companies also taking in venture capital as they aim to reverse this underserved market include Blink, an app for frontline workers to use and engage with the various IT services used by their organizations, as well as with each other. Shiftsmart, a marketplace matching shift workers to employers, raised $95 million, while messaging app When I Work closed on a huge round — $200 million. Meanwhile, Fountain brought in $85 million and Seasoned grabbed $18.7 million for its tool for restaurant workers. Earlier this year, we saw Homebase, which raised $71 million earlier this year, and Workiz, which focuses on home services pros, raised $13 million.

AskNicely has over 60 employees, and plans to double that over the next year. Ward wouldn’t get specific about company revenue other than to say the company is a “high-growth SaaS business.” He did reveal that AskNicely is working with 1,300 customers, mainly in North America, Australia and Europe, and that it has gotten to a point with its selling price that “every new customer today is worth 10 times more what we have been doing historically.”

“We are here to fix how frontline workers work, and in the past 24 months, companies have realized a new appreciation for what they have done,” Ward said. “They are underserved by technology and frankly underappreciated, underpaid and underestimated. We are helping them be successful, but we can’t do it alone. We need to build a movement to link arms with coalition partners and build partnerships with other players to make a difference.”