Apple’s next generation of CarPlay is coming in late 2023 — here’s what to expect, plus which cars will support the update 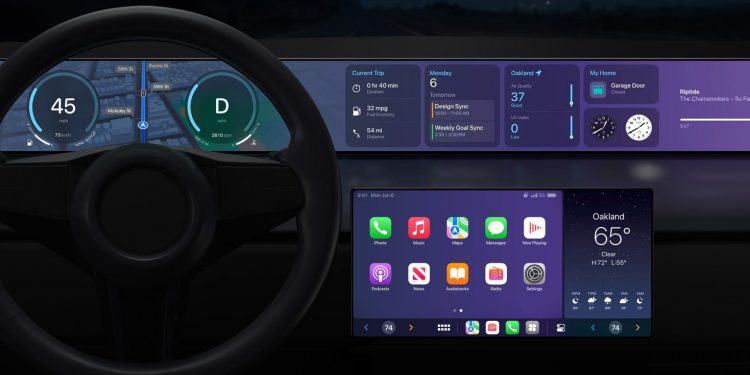 Apple’s CarPlay with iOS 16 spread across an entire car’s dashboard.

Apple announced a new version of CarPlay that will be included with iOS 16 when that update is released in the fall, and it will bring an unprecedented level of design and customization to digital dashboards later in 2023.

Since 2014, CarPlay has been an extension of your iPhone to your car’s infotainment screen for navigation, playing audio, and making calls or sending texts — all with your voice.

The new CarPlay, while relatively normal at first in 2022, will go well beyond this by expanding into the rest of your car’s dashboard screens, essentially putting an Apple skin over almost all of the controls and gauges by the end of 2023.

The new CarPlay will take over your dashboard in late 2023.

These CarPlay updates coming will include navigation upgrades.

For cars with dashboard displays rather than dashboards with analog gauges, the new CarPlay will read and display real-time data, like the speed, RPM, tachometer, fuel, mileage, coolant temperature, oil pressure, and trip distances. We even saw gauges like torque and power (horsepower) shown as options by Apple.

Apple also said that you’ll be able to customize the design of your dashboard with different themes, styles, and layouts. You’ll also be able to add widgets from your iPhone, like navigation, notifications, weather, smart home device control (like a garage door), calendars, and weather to both your car’s dashboard and infotainment screen.

The numbers and dials almost look like the Apple Watch’s interface here.

CarPlay controls are also expanding into other aspects of your car outside of entertainment, like climate control and the radio.

Which cars will support the new CarPlay?

Apple’s new CarPlay will let you customize just about everything with your car’s dashboard.

Apple said that the new CarPlay will become available in cars “late next year,” which is to say 2024 model years for many car manufacturers.

As for the car manufacturers that will support the new CarPlay in late 2023, Apple has announced the following partners: