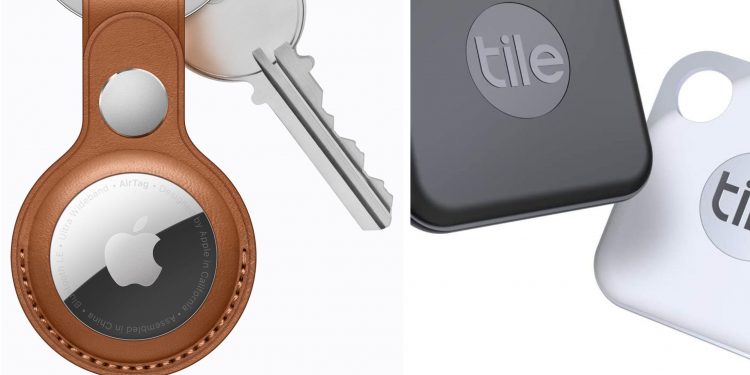 Item trackers are straightforward but highly useful gadgets, whether they’re helping people find lost keys around the house or missing luggage during trips. Using Bluetooth and other technologies, these compact devices pair with apps on you smartphone to help locate whatever they’re attached to.

Since its founding in 2012, Tile has become a household name for Bluetooth item trackers, but Apple introduced its own tracker, the AirTag, for iPhone and iPad owners in 2021.

All Tile products and AirTag have built-in speakers and use Bluetooth as their primary method for finding lost items, but Apple also uses Ultra Wideband technology and integrates the AirTag with its Find My network. AirTag only works with an iPhone or iPad, while the Tile app is compatible with both iOS and Android.

To help you decide which tracking device is best for your needs, we compared Tile’s lineup with Apple’s AirTag. Here’s how they stack up when it comes to key features and pricing.

AirTag is priced at $29 for one unit, with optional engraving. Apple also sells a four-pack of AirTags for $99. Tile prices start at $25 and go up depending on the model. Tile products are available in sets or combo packs with multiple sizes, and four packs can cost anywhere from $70 to $110.

Unlike AirTag, Tile products come in varied sizes and have different ranges. The cheapest option is the $25 Tile Mate, a small keychain square with a 250-foot Bluetooth range and an optional adhesive.

In terms of size, the Tile Sticker is nearly identical to Apple’s AirTag and has the same 250-foot range as the Tile Mate. Tile Sticker starts at $30 each, $55 for a two-pack, or $98 for a four-pack.

The $35 Tile Pro has the best tracking range and loudest speaker of all the models, and comes in a range of colors. It can track up to 400 feet and also has a replaceable battery. And Slim, the thinnest Tile, costs $35 and can slip into a wallet or adhere to the back of a laptop, tracking up to 250 feet.

Tile also has a paid premium plan that includes battery replacements and a three-year warranty on all devices. Tile Premium costs $30 per year, but you can get one year for free when you buy your first Tile device. Tile offers a protection program ($100/year) as well that will reimburse you for up to $1,000 if an item is lost with a Tile attached.

AirTag and Tile devices both use Bluetooth for tracking items within a certain range. Tile’s trackers have Bluetooth ranges from 250 to 400 feet depending on the model, but Apple does not specify an exact range for its AirTag.

In addition to Bluetooth, AirTag also uses Ultra Wideband technology to enable an Apple-exclusive feature called “Precision Finding.” Precision Finding can point you to nearby items and estimate distance down to the foot, which is something Tile tackers can’t do. The feature uses input from your iPhone camera, gyroscope, and other sensors to provide an accurate location. It requires an iPhone 11 or newer model to function.

AirTag and Tile trackers also have features designed to locate items when they’re outside of Bluetooth range. AirTags integrate directly with Apple’s anonymous Find My network, which uses other people’s Apple devices to help locate your item. Tile has a similar feature that allows users to track an item’s last known location by utilizing anonymous location updates from other phones running the Tile app.

Tile Pro and AirTag use the same replaceable battery with a one-year lifespan, while the batteries in Tile Sticker, Mate, and Slim are built to last for three years and cannot be replaced.

AirTag doesn’t come with a way to attach the tracker directly to your keys or other devices, so you’ll need to purchase an extra accessory like a keychain holster. Apple sells AirTag accessories ranging from a $13 Belkin holder with a strap to a $449 Hermès luggage tag. The majority of the Apple-branded accessories currently cost more than a single AirTag alone.

Meanwhile, Tile trackers are designed to be stuck on to objects with an adhesive. The Tile Mate and Pro also feature the ability to attach like a keychain thanks to their built-in cutout hole.

AirTag vs. Tile: Which tracker should you buy?

The decision between AirTag and Tile starts with whether you have an iPhone or Android phone. Android users need to opt for Tile to get full functionality from their tracker, while iPhone users have a lot to gain with an AirTag thanks to Apple’s Precision Tracking and dedicated U1 chip for the Find My network.

Tile offers a greater variety of prices and models compared to AirTag, which makes them better suited for certain devices. For example, the Tile Slim is ideal for a wallet, and the Tile Sticker is more suited for indoor devices like TV remotes.

Tile devices share a network like Apple’s Find My network, but you need to pay $30 for Tile Premium to get some of the features that Apple offers for free, like automatic phone alerts when you leave your tracker somewhere. Tile Premium will also let you share your tracker’s location with friends via the Tile app, while AirTag locations can only be tracked by a single user.

It’s also worth mentioning that an AirTag will typically be more expensive than a Tile device once you factor in the keychain or accessories needed to hold the tracker in place. Tile’s combo packs with different models offer a broader range of utility at a lower cost.