Apple and Amazon are changing the way we watch live sports 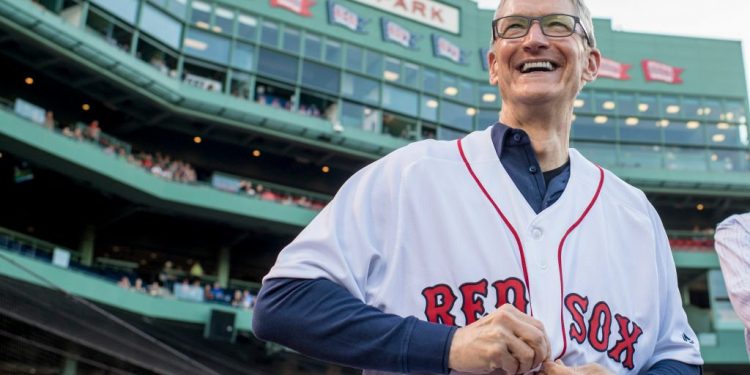 Folks who love sports and hate technology might want to sit down for this one because your worst nightmares are coming true:

Certain MLB and NFL games will only be available via streaming for the 2022 season and beyond.

To keep tabs on your top squads, you’ll need to give Apple and Amazon subscription dollars, own a device that’s compatible with their streaming services, and pray (to whatever deity you worship) that your home internet connection holds up for three and a half hours.

If that sounds scary to you, we get it. The days of wiggling the bunny ears on top of the beautiful, old boxy TV to get a clearer picture are over. But if you just let us walk you through what’s happening in live sports and why, you’ll be prepared for this new streaming world order.

Wait, I can’t watch my team on TV anymore?

When the 2022 NFL season kicks off this fall, Thursday Night Football games will air exclusively on Amazon’s Prime Video app. It’s an 11-year agreement between Amazon and the NFL which sees the Bezos empire shelling out $1 billion annually for the privilege of streaming just 15 regular season games a season. Thursday Night Football has been simulcast across Fox, NFL Network, and Prime Video since 2017, so the infrastructure is there. Now it’s just Amazon-exclusive.

As for baseball, America’s pastime, you’ll have to turn to the streaming home of Ted Lasso. Starting in April, two MLB games will air every Friday night exclusively on Apple TV+. Apple reportedly paid $85 million for the rights to just two games per week. The MLB’s media apparatus will produce the broadcasts, so all Apple has to do is make sure the stream works. Apple TV+ hasn’t yet been used to stream live events of this scale, so it remains to be seen how the streaming quality and performance will compare to regular TV.

Apple and Amazon are also considered frontrunners to land the rights to NFL Sunday Ticket, per the Sports Business Journal. That’s a nifty little package DirecTV runs (with rights expiring after the 2022 season) that lets you stream any NFL game on Sundays aside from the ones in the market you live in. It’s very convenient for, say, a Kansas City Chiefs fan living in New York City, but it also costs $300 per year if you live in an area without DirecTV service, and is otherwise part of satellite packages that cost $80/mo or more. Hopefully, Apple or Amazon can find a way to bring that number way down.

Why is this happening now?

Apple wants this to be more than just a ‘Ted Lasso’ box. Credit: Neil Godwin/Edge Magazine/Future via Getty Images)

Put simply, it’s a sign of the times. Only 56 percent of Americans watched network TV over cable or satellite in 2021, down from 76 percent in 2015, according to Pew Research. It’s no secret why: Streaming is cheaper and more convenient. Even the most basic cable package is more expensive than Netflix’s priciest tier, and only 39 percent of Americans said they preferred live TV over on-demand content in a 2018 Hub Entertainment Research study, as reported by Deadline. However, sports can’t really be consumed the same way as Stranger Things. There just isn’t much juice to watching a game on demand hours or even days after the outcome has been decided.

Dan Ives, an analyst with market research firm Wedbush, said that Apple and Amazon are going all in on sports because it’s the biggest thing in media they don’t yet control.

“Sports really is the golden goose,” Ives said. “Amazon and Apple find themselves in a unique position because of their cash piles, which…give them the ability to bid for live sports content, which ultimately will be the magnet to get more and more subscribers.”

“Sports really is the golden goose.”

The Information reported that Apple TV+ had only about 20 million paid subscribers last year, which is teensy compared to Netflix’s 222 million. Adding baseball and football would almost certainly nudge that figure upward. The same could be said for Amazon’s Prime subscription, which crossed the 200 million member threshold last year. That subscription number is staggering, but obviously Amazon will always want more people paying for Prime.

It’s reasonable for these companies to think live sports will drive new streaming subscriptions. Even with the caveat that Thursday Night Football is generally considered by fans to be one of the lesser games each week (as teams are playing on just a few days of rest), it still pulls a big audience — one Thursday game reached 20 million viewers last year. Baseball is harder to chart because a large majority of games aren’t broadcast nationally (and there isn’t a pre-existing Friday night national double-header), but for context, last year’s World Series averaged 11.7 million viewers across all six games.

Could this make life harder (or easier) for sports fans?

If any of this sounds worrying, don’t fret too much. These sports leagues negotiate TV rights deals that last entire decades, so the way it works now is the way it’s going to work for several more years. As an example, the NFL’s current arrangement runs through 2033.

Still, there are opportunities for viewing inconveniences with what Eric Schmitt, an analyst at market research firm Gartner, calls the “streamification” of sports right now. The most obvious one is a lack of reliable home internet in rural areas. Last year, the Biden administration said 30 million Americans lived in places with unacceptable broadband infrastructure.

“This does seem to…potentially further disenfranchise those of us who don’t have reliable high speed access either because of where we live or our economic status,” Schmitt said.

And while a great many of our beloved senior citizens can work their way around modern tech, it’s no secret that older people tend to acclimate poorly to these sorts of changes. Apple getting in bed with baseball to start its streaming journey is fascinating because that sport has the oldest audience of the big team sports. Sports Business Journal estimated the median baseball viewer to be 57 in 2016. Obviously, six years have passed since then, so baseball’s audience isn’t getting any younger.

SEE ALSO: Watching live sports online is a pain, but these 4 apps make it easy

Despite the cost savings, the gradual shift of live sports from traditional TV to streaming is a prime example of how the march of technological progress isn’t always a universally good thing. Fans will inevitably be shut out of watching sports as they are increasingly locked behind streaming platforms. On the other hand, it presents an opportunity as new fans might be made out of people idly scrolling through Prime Video on a Thursday night.

But whether this move makes our favorite teams more or less accessible, we can all at least agree on one thing: The streams better work.