AOC mocks Brett Kavanaugh for skipping dessert at DC steakhouse amid protests outside: ‘The least they could do is let him eat cake’ 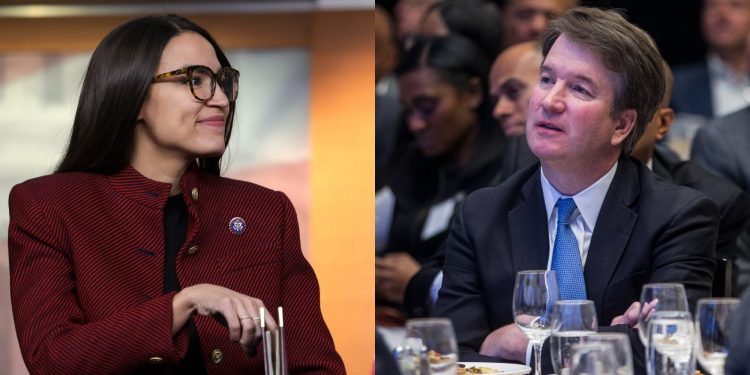 “Poor guy. He left before his soufflé because he decided half the country should risk death if they have an ectopic pregnancy within the wrong state lines,” the prominent progressive a “Squad” member wrote on Twitter. “It’s all very unfair to him. The least they could do is let him eat cake.”

Kavanaugh was one of six justices that voted to overturn Roe v. Wade, revoking the constitutional right to an abortion.

In the wake of that ruling, women with ectopic pregnancies — which occur when an embryo implants outside the uterus, can be life-threatening, and never result in a live birth — may no longer be able to access care in states that enact sweeping abortion bans.

Politico reported on Friday that Kavanaugh left Morton’s as protesters with ShutDownDC gathered outside, though they also reported that the conservative Supreme Court Justice “did not hear or see the protesters and ate a full meal but left before dessert.”

Morton’s issued a statement to Politico denouncing the protest, saying Kavanaugh and other patrons were “unduly harassed by unruly protestors.”

“Politics, regardless of your side or views, should not trample the freedom at play of the right to congregate and eat dinner,” a representative for the restaurant chain told Politico. “There is a time and place for everything. Disturbing the dinner of all of our customers was an act of selfishness and void of decency.”

“I will never understand the pearl clutching over these protests,” Ocasio-Cortez continued. “Republicans send people to protest me all the time, sometimes drunk and belligerent.”

She also alluded to prior media coverage of conservative figures being driven from restaurants, including when former White House Press Secretary Sarah Huckabee Sanders was asked to leave a Virginia restaurant in 2018.

“Nobody cares about it unless it’s a Republican in a restaurant,” said Ocasio-Cortez. “Can someone please explain the obsession because I don’t get it.”