An extremely early Trump 2024 announcement would be a ‘train wreck’ for the GOP that also won’t deter the prosecutors on his heels, experts say 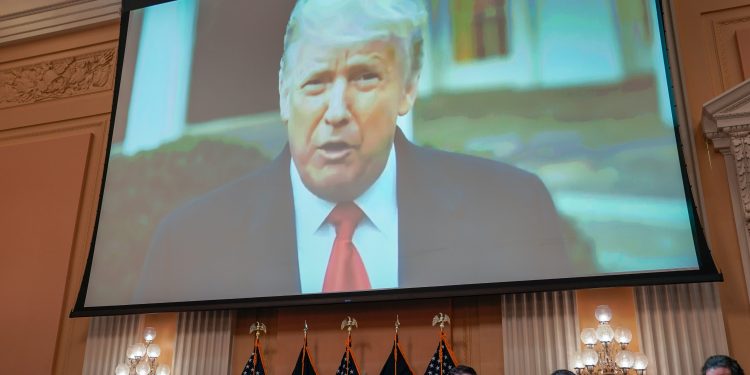 Donald Trump is mulling a pre-midterms campaign launch as damaging revelations pile up.

House investigators have aired damning testimony and unfurled reams of evidence. The Justice Department is closing in with search warrants and subpoenas to key figures in the efforts to overturn the 2020 election. In Atlanta, a local prosecutor is summoning several Trump allies — including Sen. Lindsey Graham and Rudy Giuliani — to testify before a grand jury.

None of which seems to be deterring Donald Trump.

Far from on his heels, the former president is mulling an unusually early announcement that he is running for president, a move designed to steal oxygen from emergent Republican rivals and shield him from the damning revelations spilling out of the inquiries into his efforts to overturn the 2020 election. Multiple news organizations have reported that he could announce a third White House bid as early as this month, but Trump recently backed off that idea, a Republican strategist told Insider following conversations with two of the former president’s advisors.

An early announcement by Trump may intimidate some of his up-and-coming rivals out of the 2024 race, but it would mean tolerating some tactical downsides.

Trump would be ineligible to tap into the millions of dollars stashed in his political action committee to directly support his presidential run. Federal campaign finance laws would cap donations to a Trump campaign at $2,900 per person through the primaries, limiting the former president’s ability to tap into wealthy donors. And an early announcement would thrust the polarizing former president into the midterms and backfire on Republicans aiming to focus on President Joe Biden and inflation in their bid to retake control of Congress.

Nor would an early announcement stave off potential charges stemming from his efforts to hold onto the White House.

To be sure, an official announcement would only raise the already high stakes of charging the former president for a Justice Department determined to remove itself from the politicization of the Trump era.

But Trump should not expect another run for president to serve as any kind of forcefield against prosecution, former prosecutors and other legal experts said, no matter how much an active candidacy would complicate a case for the Justice Department.

“Announcing years before an election, I don’t think that will serve as the proper prophylactic to have DOJ back off,” said former acting US attorney Michael Sherwin, who led the federal prosecutor’s office in Washington, DC, in the final months of the Trump administration and oversaw the initial prosecutions stemming from the January 6, 2021 attack on the Capitol.

An early campaign announcement could carry the political upside of crowding out Republican rivals who prefer not to enter a contest against him.

Florida Gov. Ron DeSantis, who has polled at or even ahead of Trump, hasn’t said whether he’d run for the White House as he gears up for his gubernatorial reelection this year. It’s not clear how a Trump announcement would factor into his decisionmaking.

That attention isn’t lost on Trump. He sees DeSantis as a rival and, in conversations with advisors that have spilled into news reports, chafed at a governor 33 years his junior who represents a new generation of Republican populists informed by Trump.

It’s growing increasingly clear that not all Republicans see Trump as the de-facto nominee for their party in 2024, regardless of when he announces, NBC News reported.

Trump’s advisers are urging him to delay an announcement until 2023, but a chief perspective for Trump would be that of of his wife, Melania Trump, according to the GOP strategist who has spoken to Trump’s advisors.

One of the reasons Republicans are urging Trump to wait is to help congressional candidates and sitting lawmakers make inroads in the November midterms. Democrats are beleagured by soaring inflation and their failure to deliver on key aspects of Biden’s agenda, with Republicans poised to benefit from voter dissatisfaction.

Republicans have focused much of their campaign messaging on the high prices weighing down voters under President Joe Biden’s watch, and a Trump announcement could impact the 2022 midterms “in uncertain ways,” said one Republican strategist who discussed an early announcement with Trump.

“Win first, answer questions later,” the person said. Some worry that Republicans’ chances to retake the House could be hurt if Democrats are successfully able to make midterms about Trump, a circumstance that likely contributed to GOP losses in two 2021 runoffs that gave Democrats their razor-thin control of the Senate.

One top GOP strategist told Insider that a pre-midterm announcement from Trump would be a “train wreck for the party” and “a complete mess.”

“It will take the emphasis off Biden and the administration and put it on Trump — which is right where he likes it — and would be terrible for candidates” who will then be asked about Trump’s campaign as well as their thoughts on the January 6 hearings, the person said.

Campaign finance laws are another reason to wait. After an announcement, Trump would have to set up an official campaign account that would accept no more than $2,900 for donations from individuals, said Sheila Krumholtz, executive director of OpenSecrets, a nonpartisan reseach organization focused on money in politics.

Currently, Trump can raise unlimited sums through Super PACs and coordinate on messaging and events. He also doesn’t have to report all the spending details from his political operation, which would include everything from payroll and travel to polling firms.

“The more money politicians can raise and stand outside of the limits before they start a campaign, the easier it is to raise money,” Krumholtz said.

The testimony of Cassidy Hutchinson, a former top aide to Trump White House Chief of Staff Mark Meadows, shed light on Trump’s mindset in the run-up to the Jan. 6 attack.

Trump has a reputation for responding to investigations with accusations of political bias. In the face of an investigation into the Trump Organization, Trump’s lawyers accused New York Attorney General Letitia James of prosecutorial misconduct and highlighted past statements in which she referred to Trump as an “illegitimate president” who “should be scared” of her.

During the Russia investigation, Special Counsel Robert Mueller III’s team declined to consider indicting Trump in light of the Justice Department’s longstanding policy against charging a sitting president. Now, more than a year removed from the presidency, Trump has lost that protection at a time of mounting legal risk.

“You can’t let the former president immunize himself by declaring his candidacy super early and then claiming, ‘Now I’m off-limits, you can’t indict me,'” said Randall Eliason, a George Washington University law professor and former public corruption prosecutor in the US attorney’s office in Washington, DC. “If he is charged, no matter when it happens, part of what he’s going to claim is: This is political and this is the Biden Justice Department trying to take me out. He will claim that whether or not he has announced his candidacy.”

In damning testimony last week, a former White House aide said Trump learned that some supporters gathered on January 6, 2021, were armed before he urged them to “fight like hell” and march on the Capitol. The bombshell testimony from Cassidy Hutchinson, once a top aide to former White House chief of staff Mark Meadows, shed light on Trump’s mindset and activities ahead of the Capitol attack and eroded any potential legal defense that he was merely propounding well-founded concerns about election fraud.

Hutchinson’s testimony came within a week of the Justice Department issuing subpoenas and executing search warrants in connection with January 6 and efforts to overturn the 2020 election. On June 22, federal investigators searched the home of Jeffrey Clark, a former Justice Department who backed Trump’s baseless election fraud claims, and FBI agents seized the phone of John Eastman, a conservative attorney behind a fraught legal theory for then-Vice President Mike Pence to delay or block the certification of Joe Biden’s electoral victory.

It is unclear to what extent the Justice Department’s intensifying inquiry is focusing on Trump. But legal experts said the testimony before the House committee investigating January 6 could support an eventual prosecution.

A third run for president could influence any decision by the Justice Department to bring charges — “but not yet,” said Barb McQuade, a University of Michigan law professor and former US attorney in Detroit.

McQuade pointed to a Justice Department policy to avoid bringing cases or taking investigative steps that could affect the outcome of an election. “That usually results in inaction around 60 days before an election. Primary elections will not be held until 2024, so I don’t think a campaign announcement will have much effect on a DOJ investigation,” she said. “I would expect charges, if any, to be filed well before then.”

Hutchinson’s testimony was particularly damaging in that it addressed areas of potential criminality that House lawmakers, lawyers, and judges had already identified. In her two-hour appearance before the House select committee, Hutchinson recounted a conversation she had with then-White House counsel Pat Cipollone, who pulled her aside just days before January 6 out of concern about Trump’s considerations of marching to the Capitol with supporters.

“We’re going to get charged with every crime imaginable,” Cipollone said, according to Hutchinson’s recollection of the January 3, 2021 conversation.

One of the crimes on Cipollone’s mind at the time was the same one the House committee accused Trump of committing in a March court filing: obstruction of an official proceeding, a felony carrying a maximum sentence of 20 years in prison. A federal judge in California also said that Trump “likely” obstructed Congress, in a ruling that described the former president and Eastman’s activities as a “coup in search of a legal theory.”

Another judge suggested that Trump incited the crowd that gathered near the White House on January 6 for a “Stop the Steal” rally. In a February ruling, Judge Amit Mehta said that, after fostering an “air of distrust and anger” with his claims the 2020 election had been stolen, Trump should have realized that his supporters would have interpreted his incendiary speech as a “call to action.” Mehta’s ruling allowed civil lawsuits to proceed against Trump in connection with January 6.

Ultimately, the decision of whether to charge Trump falls to the Justice Department, where Attorney General Merrick Garland has repeatedly declared himself unmoved by political pressure and stressed that prosecutors will “follow the facts and the law.” Garland has also reiterated that “no one is above the law.”

Still, any charges against Trump would surely draw outcry from Republicans and claims that the Justice Department was taking out Biden’s political rival.

Norm Eisen, who served as counsel for House Democrats in Trump’s first impeachment, told Insider that a 2024 candidacy would be a “complicating factor” in any consideration of charges against Trump.

But, he told Insider, “we can’t allow a presidential candidate to effectively self-pardon by a premature, atypically early announcement of a reelection campaign.

“I don’t think prosecutors should allow his decision whether or not to run again to influence them. I would prefer a world in which we weren’t forced to make these decisions about an ex-president, but it would be even worse to have a world in which an ex-president could behave with utter legal impunity and get away with it and commit really outrageous violations of law with no consequences.”