Americans haven’t been this pro-union since 1965 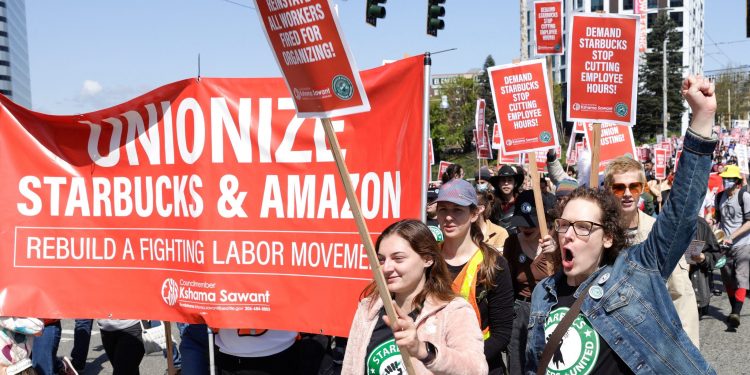 People march in the middle of East Pine Street during the “Fight Starbucks’ Union Busting” rally and march in Seattle, Washington on April 23, 2022.

American support for labor unions is the highest it’s been in more than half a century.

Seventy-one percent of Americans approve of labor unions, according to a new Gallup poll released on Tuesday. The last time Gallup measured a union approval rating this high in the US was 1965.

The data comes from Gallup’s annual Work and Education survey, which polled a random sample of 1,000 adults by phone in all 50 states and D.C. between August 1 to 23.

The increased support for labor unions likely owes to several factors that emerged in recent years. The Great Resignation, for one, spurred workers to rethink their expectations for their jobs and demand better from their employers. The hot labor market helped tip the scales of workplace power in employees’ favor, though not evenly, equipping them to ask for more. Many workers also took stock of how their companies fared during the pandemic — and how CEO pay stacked up to theirs — and decided it was time to ask for more. That helped propel last fall’s Striketober.

“We’re a part of a movement now that seems to be sweeping the nation — where the American blue-collar worker just wants what’s fair and just in a time of economic growth,” Dan Osborn, a Kellogg’s worker for 18 years, told Insider while on strike last fall.

At the same time, historic and high-profile union wins across the tech and retail industries at companies like Amazon and Starbucks, achieved by essential workers demanding better pay and safer working conditions during the pandemic, may have helped drive union support in the public eye. All of that comes as the Biden administration continually affirms its support for the labor movement.

But even as approval remains high, union membership still remains low, dropping yet again in 2021. Labor advocates attribute that to labor law tilted to employers. Jennifer Abruzzo, the Biden-appointed general counsel for the National Labor Relations Board, is pushing to make mandatory anti-union meetings from employers “unlawful” and streamline the process for unionizing.

“What we really are trying to do is prevent that implicit threat, if not explicit, and the fear that it inspires on these economically dependent employees, which I consider to be the epitome of coercion,” Abruzzo previously told Insider.