Amazon’s Fire HD 10 tablet is an excellent value for video streaming, but not if you watch YouTube or Apple TV Plus 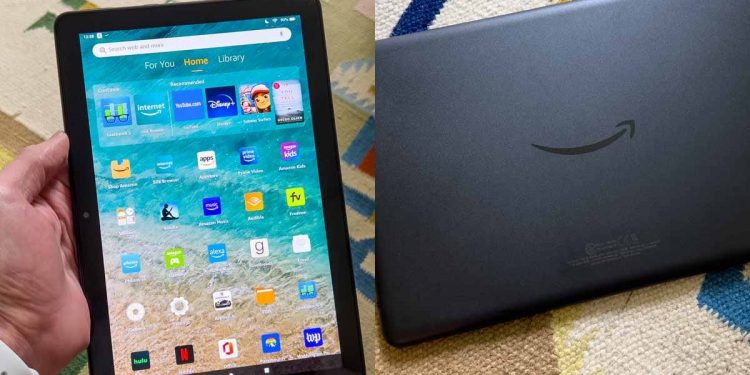 However, this is a case where you get what you pay for. When you buy a budget-priced tablet, you shouldn’t expect an experience that’s close in quality to an iPad or a Samsung Galaxy Tab.

That’s not necessarily a bad thing, as a basic tablet is exactly what some people want, especially if all they do on tablets is stream video. If that’s the case, you technically don’t need anything more expensive. That is, unless you really want YouTube or Apple TV Plus, which this tablet does not support.

What does “lockscreen ad-supported” mean?

We recommend you buy the ad-supported version because you can disable the ads yourself later for a $15 fee if you find them obnoxious.

The right edge of the Amazon Fire HD 10 (2021) tablet showing its buttons and USB-C port.

Amazon’s Fire HD 10 is utilitarian with its plastic back and a fairly average front with uniform display borders.

Compared to pricier tablets from Apple and Samsung with flat edges, the Fire HD 10 has rounded edges that feel more comfortable and easier to hold.

The 10.1-inch display is a simple, unpretentious 1080p (FHD) LCD panel to display video and content. There are no fancy frills or features like HDR or high refresh rates here.

As such, the Fire HD 10’s display is totally fine for anything you do on the tablet, and it does its job admirably — especially for such a low price.

It’s clear the Fire HD 10 isn’t a powerhouse. It feels like using an older tablet, like the 2017, 5th-gen iPad. But lower performance is to be expected on a cheaper tablet.

The Fire HD 10 runs apps and casual games decently well, but not as quickly and smoothly as the iPad. Graphically demanding games, like “Asphalt 9,” run at a sluggish pace. But, if you plan to use the Fire HD 10 exclusively to stream video, the Fire HD 10’s performance won’t be an issue.

In benchmarking with the Geekbench 5 app, the Fire HD 10’s processor scored 301 for single-core performance, and 997 for multi-core. Those are much lower scores than the 9th-gen iPad’s 1,330 single-core and 3,470 multi-core scores, which makes sense considering its $329 starting price.

Amazon’s operating system (OS) on its Fire HD tablets is a highly modified version of Google’s Android OS, but you don’t get access to a huge range of popular apps and games. We found that even some common, popular apps — like Reddit or LastPass — aren’t available.

Most notable is the lack of any Google apps. That means no YouTube, no Gmail, no Google Maps, and more.

It’s possible to use the web versions of these apps in Amazon’s Silk web browser, but it’s far from an ideal solution to the problem of missing common apps.

With that said, Amazon’s App Store has a decent showing for popular video streaming apps, including Netflix, Prime Video, Hulu, Paramount Plus, Disney Plus, Peacock, HBO Max, Starz, Showtime, and Sling. Apple TV Plus, however, is missing.

You can check out if Amazon’s App Store has the apps you want on its Fire tablet apps listings.

The Fire HD 10 has great battery life for a 10-inch tablet. In our battery test, which involves streaming a YouTube video at the display’s resolution (1080p, in this case) at full brightness, the Fire HD 10 lasted six hours and 42 minutes.

In the same test, the 9th-generation iPad lasted five hours and 25 minutes, though it has a sharper resolution and more power-hungry processor.

What are your alternatives?

It’s hard to recommend the $149.99 Fire HD 10 when Apple’s standard 10.2-inch 9th-generation iPad offers so much more — even if it starts at $329. If you catch the Fire HD 10 at its $99.99 discounted price, the standard iPad is still a significantly better tablet that’s worth the extra cost.

Not only does the iPad have every app you could possibly want, it runs those apps significantly faster than the Fire HD 10.

With that said, the Fire HD 10 is technically all you need if you use tablets exclusively to stream video.

The Kids edition of any Fire HD tablet, including the Fire HD 10 Kids edition, is also a great inexpensive option for kids to stream appropriate videos. Amazon also has some of the best parental controls and kids content on any platform.