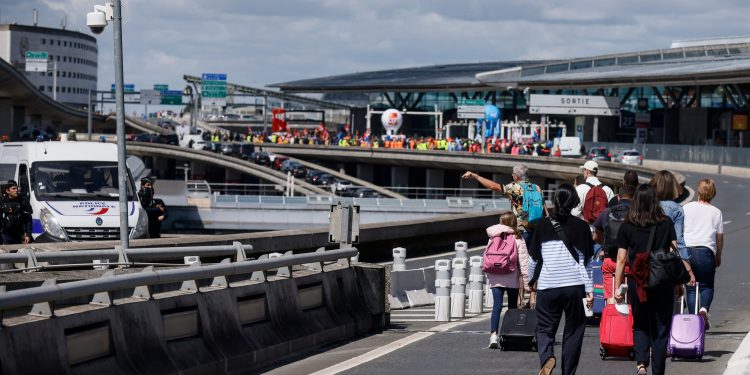 Staff at one of Europe’s largest airports have said they won’t go back to work without a 20% pay rise, as many of them battle burn-out and depression.

Loris Foreman, a ground handling agent at Roissy-Charles de Gaulle Airport in Paris, told Reuters he and other workers were striking over the rising cost of living.

Parisian airport staff have joined workers across Europe in picketing for higher pay. It has led to 10% of flights out of the airport being canceled, a spokesperson for airport operator ADP told France 24. France’s aviation authority ordered the scrapping of 17% of flights yesterday, primarily affecting short-haul routes.

Foreman, who handles flights for airlines including Qatar Airways, Emirates and Air Canada with a subcontractor, said the gruelling schedule was leaving his colleagues with signs of depression.

“When you start at 5 a.m. or work odd hours all the time, this leads to burn-out, and at the moment there are loads of airport staff who are on sick leave for depression,” Foreman told Reuters.

Airports across Europe and America are struggling to keep up with resurgent demand for air travel following the COVID-19 pandemic, when airlines trimmed their headcount to cope with restrictions.

It has led to a litany of issues, including London Heathrow turning passengers away from its packed airport, and Delta airline workers picketing at hubs across the US.

“Airport activity has reached 95% of its pre-COVID level, except that now we have 20,000 employees less at the Roissy (Charles de Gaulle) airport, so working conditions deteriorated dramatically,” Nicolas Pereira, a striking airport worker with the CGT union, told AP.

“Those responsible are the various bosses who hurried to lay off workers during the COVID period to reduce the cost of labor.”

Now striking workers like Foreman and Pereira, led by the CGT trade union, are demanding a 300 euros ($314) monthly pay raise from Aeroports de Paris for all staff.

Inflation in the Eurozone, of which France is a member, was estimated to have hit a record 8.6% in June. Foreman said it meant his current monthly salary of 1,770 euros ($1,845) net was no longer adequate.

Marine Marivel, who has worked as a security agent at Charles De Gaulle for 18 years, told the New York Times she was spending nearly two-thirds of her 1,500 euros ($1,564) take-home pay on rent, while price rises for energy and food quickly eroded the rest. She said staffing shortages had doubled her workload.