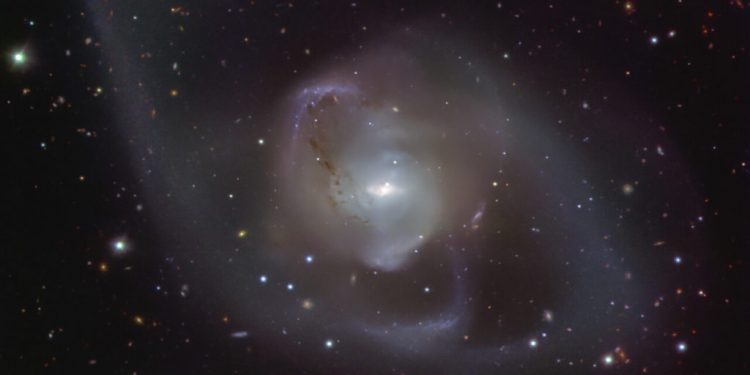 The galaxy NGC 7727 was born from the merger of two galaxies that started around a billion years ago. The cosmic dance of the two galaxies has resulted in the spectacular wispy shape of NGC 7727. At the heart of the galaxy, two supermassive black holes are spiralling closer to each other, expected to merge within 250 million years, the blink of an eye in astronomical time. This image of NGC 7727 was captured by the FOcal Reducer and low dispersion spectrograph 2 (FORS2) instrument at ESO’s Very Large Telescope (VLT). Alexander Sheremetiev The

European Space Observatory’s Very Large Telescope (VLT) took an image of the galaxy NGC 7727. This giant was born from the merger of two other galaxies, which occurred about a billion years ago. Because of this, in the center of NGC 7727 at once two supermassive black holes.

The collision of galaxies is not like two solid bodies meeting. Most of the space of such systems are voids, filled only with gas molecules. Therefore, when two galaxies collide, it is as if they are spinning in a common dance. At the same time, the tidal forces created by gravity change the shape of the primary structures.

Tails” of stars, gas and dust swirl around galaxies to form a new system. It usually has an unusual disordered and asymmetrical shape. Like the one you can see in this new image of NGC 7727.

This galaxy is located 89 million light-years from Earth in the constellation Aquarius. In addition to its unusual shape, it attracts researchers with two massive centers left over from the original objects. Each nucleus consists of a dense group of stars with a supermassive black hole at its center.

The researchers note that the gravitational centers in NGC 7727 are the closest pair of black holes ever discovered. The distance between them is now only 1,600 light-years. In just 250 million years (pretty fast on a cosmic scale), they will merge into one even more massive black hole.

Useless” bacteria on Earth will provide life for Mars colonizers

A portrait of the “king of ancestors” was found in a pyramid in China. He ruled more than 4,000 years ago