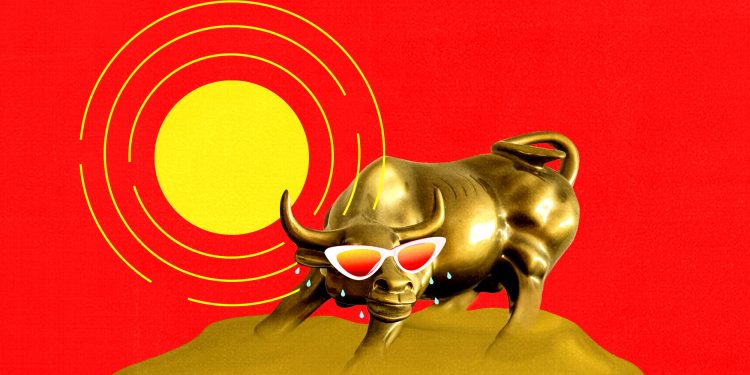 A stock market indicator is looking increasingly bullish as investors search for signs that the current sell-off has nearly run its course — potentially marking a green light for renewed buying.

Bank of America’s Sell Side Indicator, which tracks the average recommended allocation to stocks by US sell-side strategists, dipped to 55.0% in May from a downwardly revised 55.7% in April.

The latest reading marks the fifth consecutive monthly decline and puts the SSI closer to a buy signal than a sell signal for time since September 2020, when the S&P 500 began a 30% rally over the next year, according to a note from BofA analysts led by Savita Subramanian.

BofA said the SSI shows sentiment has soured but doesn’t yet indicate capitulation, or the point that is seen by some as the bottom of a sell-off where investors throw in the towel.

Still, when the SSI has been this close or closer to a buy signal, the S&P 500’s near-term returns have historically been positive 96% of the time, the analysts said.

“In our view, there are reasons to be constructive in the near-term (especially amid bearish sentiment), but continued volatility is likely,” they said. “We recommend sticking with High Quality and a mix of defensive and inflation/rates beneficiaries.”

The optimism comes as the Federal Reserve moves to tighten monetary policy further amid high inflation. The Fed hiked rates by 50 basis points on May 4, and signaled that further increases of similar size will continue until inflation comes back down to its 2% target.

Fed Chair Jerome Powell doubled down on such sentiments, telling the Wall Street Journal that the central bank “will go until we feel we’re at a place where we can say financial conditions are in an appropriate place.”

But some of the underlying factors behind inflation may be out of the central bank’s control, with BlackRock’s Larry Fink saying much of the current situation has more to do with underlying policy and supply problems that won’t be quickly fixed with tightening.

“You can argue that fiscal and monetary policy excesses helped give rise to inflation, but there are several supply-side factors such as supply chain and logistics bottlenecks, depressed labor force participation, and higher energy and food prices, that have had a more pronounced impact on inflation,” said Richard F. Moody, chief economist at Regions Financial.