A merchant navy cadet is suing Maersk, saying the company failed to protect her from rape and sexual harassment on board one of its ships 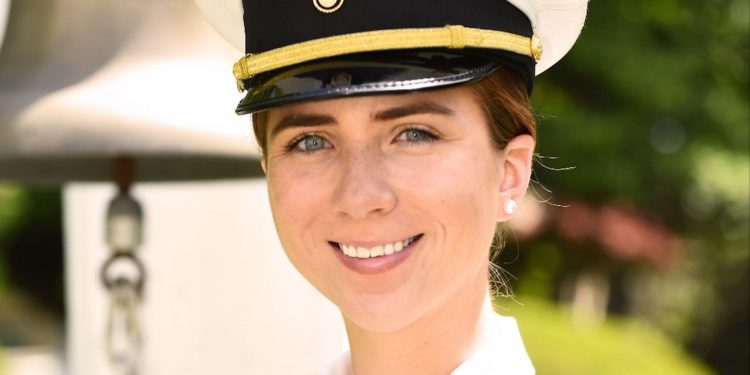 Hope Hicks of USMMA class of 2022, shown in uniform. In an earlier anonymous account alleging rape, she used the name of “Midshipman X.”

A merchant navy cadet, whose allegation that she was raped during at-sea training sparked an industry-wide reckoning, is suing Maersk, saying the shipping company failed to protect her from rampant abuse.

The cadet, Hope Hicks, says she was plied with alcohol and raped by a Maersk first engineer in 2019 while completing her mandatory at-sea training as a cadet at the US Merchant Marine Academy (USMMA), according to court documents seen by Insider.

Hicks told Insider: “It changed me completely … it took me months, even a year or so, to even recover from everything that happened on that ship.”

She first made the allegations anonymously as “Midshipman X” in October 2021, posting a detailed account of the alleged rape on a website devoted to confronting what it describes as rampant sexual abuse in the maritime industry.

Maersk spokesperson Thomas Boyd told Insider that the company does not comment on ongoing litigation. He said Maersk has “zero tolerance for assault, harassment or any form of discrimination,” and that it takes allegations of sexual abuse very seriously.

In February, Maersk fired the first and second assistant engineers for not cooperating with its investigation. It also fired three others, including the captain, for violating its alcohol policies. Hicks has not named her alleged rapist, and it is unclear if the first assistant engineer who was fired is the same person as the first engineer accused in the lawsuit.

Boyd said the company “was unable to make any findings with respect to the rape allegation,” because it was unable to speak to “any of the involved parties.” When asked by Insider if it would pursue legal action, Boyd offered no further comment.

A second suit by another cadet, who remains anonymous as “Midshipman Y,” was also due to be filed on Tuesday, but a spokesperson for the lawyer said they had experienced a “procedural issue” and the complaint “is in the process of being refiled.”

Midshipman Y says that she was subjected to “extreme sexual harassment and repeated and unwelcome physical touching” on board the MV Alliance Fairfax — the very same ship where Hicks says she was raped two years earlier, according to a draft of the complaint seen by Insider.

USMMA  — one of the seven national academies where the US trains its merchant navy — has an ongoing arrangement with several commercial shipping companies, including Maersk.

Those companies receive a large subsidy from Congress to take on and train cadets, in pairs, for their mandatory training known as “Sea Year.”  The training, which involves weeks at time at sea, allows cadets to earn their sea legs and eventually work into the industry.

Hicks was the only female on board the MV Alliance Fairfax during her Sea Year, the complaint says. She was subjected to sexual harassment “from the beginning,” in front of the rest of the crew, including unwanted romantic overtures from the First Engineer, the complaint alleges.

One day in August 2019, the crew had a heavy drinking session, despite strict Maersk rules against on-board drinking, per the complaint. It said that Hicks took part reluctantly, and, fearing the ship’s strict command structure, felt “forced” to consume 8-10 shots of hard liquor over a short time, before passing out.

Hicks woke up naked in her room and found bloodied sheets and bruises all over her body, according to the complaint. “Hope was a virgin who planned to abstain from sex until marriage,” the complaint says.

Both in the complaint and her original account, Hicks says that although her memories are incomplete she recalled being forcibly kissed by the First Engineer and him being on top of her.

According to the complaint: “She also clearly recalled the First Engineer standing over her without his clothes on, and forcing his penis into her mouth, but she was unable to move or resist. “The first engineer knew of her intoxicated state, the complaint says.

The next day, the First Engineer called Hicks in to meet with him, refuted her claim that he had raped her, and threatened her against reporting, according to the complaint. Then, to her surprise, he suggested that she might “want to make something work” seemingly romantically, it alleges.

At this point, the ship was due to remain at sea for another 50 days.

“I felt like a zombie, I felt like I was just walking through day to day, just trying to survive every single day,” Hicks told Insider. “I would say I was not in the right date of mind mentally.”

During Hicks’ Sea Year, crew members were required to complete sexual assault and harassment training. But, according to the complaint, after the alleged rape Hicks was told to complete the training on behalf of the other crew members using their individual online log-ins.

“It felt awful,” Hicks told Insider. “But it got me away from the First Engineer.”

Phones that don’t work and master keys to private areas

Hicks said this task of making cadets falsify sexual assault training on behalf of the crew is not uncommon, and, her lawyers said, it’s just one indication of how careless Maersk is in keeping cadets safe.

In 2016, then-Transportation Secretary Anthony Foxx paused Sea Year in response to allegations of abuse. Maersk acknowledged the problem in a document cited in the court filing that is no longer on the USMMA website, the filing said.

Among the changes that followed was that USMMA issued satellite cellphones to all cadets. But Hicks’ phone was “strictly controlled” by the captain, while Midshipman Y’s barely worked, the court documents say.

Hicks told Insider that cadets still fear registering official reports with the school or with crew, just as she did.

Moreover, senior crew are regularly allowed to hold a master key to cadet private quarters, and security cameras generally do not cover the hallways leading to cadets’ quarters, the complaint said.

Midshipman Y, who alleges she was subjected to “sexualized jokes, sexual advances, and unwanted sexual touching,” more than a dozen times by the ship’s electrician, began sleeping in the bathroom — the only lockable room — with a knife, according to the draft complaint.

Christine Dunn, lead counsel in both suits, told Insider that Midshipman Y has since taken a leave of absence from USMMA and was once hospitalized with a panic attack. It has meant that she is unlikely to return to the merchant navy, Dunn said.

“It has really changed the trajectory of her future,” Dunn said. “She’s still really suffering from it.”

The fact that Midshipman Y says she went through these things on the very same ship as where Hicks said she was raped “just goes to show the systemic problem that the industry has,” Hicks told Insider.

“Just because the crew changes, doesn’t mean it’s not going to happen to somebody else,” she said. “The culture needs to change in order for change to happen.”

After she returned to USMMA, Hicks decided to become a victim advocate — a student position that is part of the academy’s system of responding to sexual abuse. And there, the scale of the problem really opened up, she said.

“I had all these young girls at my school come forward to me, not only about sexual assault … but sexual harassment and just making them feel like they aren’t even human anymore,” she said. “It’s absolutely insane what this industry does to women.”

It was this that made her approach activist lawyer J. Ryan Melogy — now co-counsel on her lawsuit — to publish her story anonymously.

The post was a bombshell  — not only at the academy, but in the wider industry, and evinced calls for reform from lawmakers including Transportation Secretary Pete Buttigieg, the Maritime Administration, the trade press, and advocacy groups.

The decision to go public has “been simmering on the stove for a while,’ she said.

Asked how widespread the abuse of cadets gets, Hicks said: “It goes out of the scope that you and I can even imagine.”