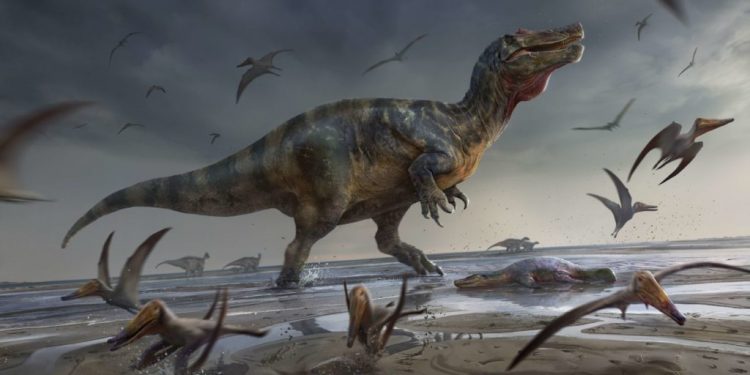 A huge dinosaur with a crocodile’s face and spiny back that roamed modern England about 125 million years ago was one of the largest predatory animals ever to inhabit Europe.

Paleontologists unearthed the remains of the animal on the Isle of Wight off the south coast of England. Researchers dubbed the newly discovered species “White Rock Spinosaurid,” after the calcareous geologic layer where the fossils were found. Since scientists have found only fragments, the animal has yet to be given an official scientific name.

According to a new study published in the journal PeerJ Life and Environment, these remains are the youngest Spinosaurid fossils ever found in Britain. Spinosaurids were bipedal, carnivorous dinosaurs with crocodile-like skulls, thin necks, and strong paws. They lived during the Cretaceous period, from 145 to 66 million years ago. The new species is a close relative of an older, potentially amphibious Spinosaurus, which was larger than Tyrannosaurus rex.

“It was a huge animal, more than 10 meters long. Judging by some measurements, the remains belong to the largest predatory dinosaur ever found in Europe,” explains Chris Barker, lead author of the study in a report from the University of Southampton in England. – It’s a shame that only such scarce material is known about it.”

Researchers found fossils of the ancient monster, including giant pelvic and caudal vertebrae, in Cretaceous rocks near Compton-China, a region along the southwest coast of the Isle of Wight. The remains were preserved in a rocky structure known as the Vectis Formation, which originated about 125 million years ago when sediments due to rising sea levels hit the site of a freshwater coastal lagoon. The authors of the study reported that it was through these lagoonal waters and sandbanks that White Rock’s spinosaurid roamed in search of prey.

A saber of unknown origin was found in Greece. Scientists were baffled by a strange artifact