A cholera outbreak could kill thousands of Ukrainians in Russian-occupied Mariupol, mayor warns 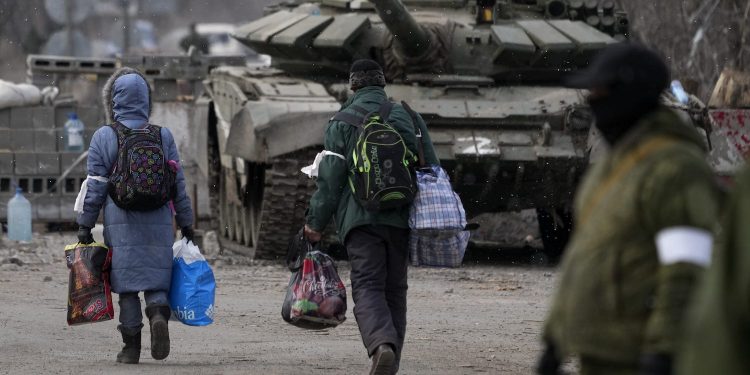 Civilians trapped in Mariupol city under Russian attacks, are evacuated in groups under the control of pro-Russian separatists, through other cities, in Mariupol, Ukraine on March 20, 2022.

An outbreak of water-borne diseases — caused in part by dead bodies contaminating wells — could kill thousands more people in the Russian-occupied city of Mariupol, Ukraine, the city’s mayor warned Friday.

“This is unfortunately the assessment of our doctors: that the war which took over 20,000 residents… unfortunately, with these infection outbreaks, will claim thousands more Mariupolites,” Mayor Vadym Boychenko said on Ukrainian television, Reuters reported.

Speaking to the BBC, Boychenko said that “cholera, dysentery, and other infectious diseases are already in the city.”

A spokesperson for the US State Department told Insider that cholera “may increasingly threaten health and well-being” in cities such as Mariupol.

“The increasingly dire situation with regards to the availability of clean drinking water and sanitation only underscores the need for humanitarian access,” the spokesperson said.

The concern is shared by British officials.

In an intelligence assessment released Friday, the United Kingdom’s Ministry of Defense said medical services in the port city “are likely already near collapse” and that “a major cholera outbreak in Mariupol will exacerbate this further,” The Evening Standard reported.

According to the World Health Organization, the ingestion of water contaminated with cholera “can kill within hours if left untreated.” A nine-year outbreak of the virus in Haiti, for example, killed approximately 10,000 people, per the United Nations.

Mariupol’s Russian-appointed mayor has denied that there are any cases of cholera in Mariupol, according to the BBC.

Around 100,000 residents are believed to remain after Russian forces besieged the city for months, destroying much of its infrastructure.

Have a news tip? Email this reporter: [email protected]