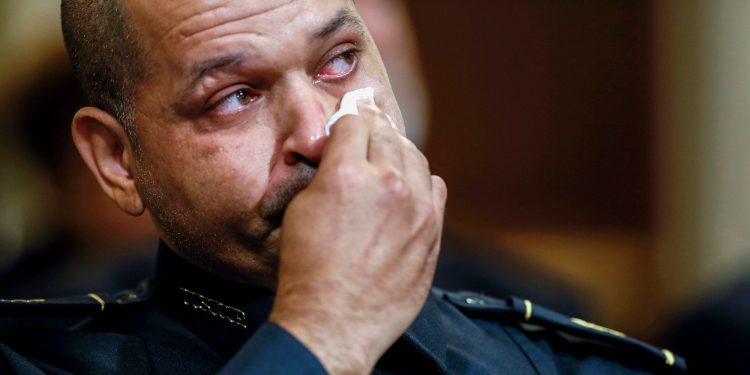 US Capitol Police Sgt. Aquilino Gonell wipes his eye as he watches a video being displayed during a House select committee hearing on the Jan. 6 attack on Capitol Hill in Washington, Tuesday, July 27, 2021.

A US Capitol Police officer injured during the January 6, 2021, attack on the Capitol told reporters on Tuesday “our own president set us up” during the sixth public hearing of the House commitee investigating the Capitol riot.

Sgt. Aquilino Gonell, an Army veteran who was in the room during Tuesday’s hearing, testified before Congress last year about the injuries he suffered while defending the Capitol. Gonell underwent surgery and was moved to desk duty as a result of the injuries he sustained to his foot and shoulder while being physically attacked by rioters during the Capitol siege.

He later told Insider that he still remembers how him and his fellow officers tried to stop pro-Trump supporters from forcing their way inside of the US Capitol building on January 6. Gonell said the latest hearing has shown that Trump was actively “working against” the police officers that day.

“Even if you give him the benefit of the doubt that he didn’t know, he still didn’t do anything to help us,” he told Insider.

His remarks come after Chief of Staff Mark Meadows, Cassidy Hutchinson, testified before the House panel investigating the January 6 insurrection.

She later testified that President Donald Trump was “furious” that people with weapons were prohibited from passing through metal detectors outside of his rally on January 6 because it kept the crowd size small.

Hutchinson said the former president ordered his aides to remove the metal detectors, also known as “mags,” and said that he wasn’t concerned that his supporters brought weapons, including assault rifles, to the rally, insisting they be allowed to march to the Capitol.

Hutchinson said, “I was in the vicinity of a conversation where I overheard the president say something to the effect of, ‘I don’t f-ing care that they have weapons. They’re not here to hurt me. Take the f-ing mags away. Let my people in, they can march to the Capitol from here.'”