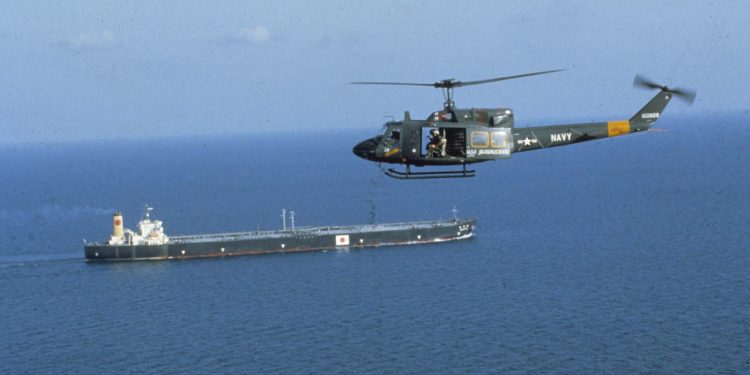 A US Navy helicopter flies over the Persian Gulf during the Iran-Iraq war, October 1987.

Special-operations forces have become US policymakers’ go-to choice for contingencies around the world. Special-operations units offer a high-reward, low-risk option who can stay out of the spotlight if necessary.

Decades of combat experience have made US Special Operations Command a well-oiled machine with a reputation for devastating effectiveness. But that hasn’t always been the case.

In a twist of fate 34 years ago, SOCOM, then new and untested, went to war for the first time, squaring off against the enemy who helped create it.

US personnel praying on the day of Operation Eagle Claw.

On April 24, 1980, a special-operations task force composed of US Air Force Air Commandos, US Army Rangers, and the Army’s newly established Delta Force went into Iran to attempt one of the most daring special-operations missions in history.

A few months prior, Iranian revolutionaries had stormed the US Embassy in Tehran and taken American diplomats hostage. Negotiations with the Iranians were failing, so President Jimmy Carter green-lit Operation Eagle Claw to rescue the hostages.

Marine Corps and Air Force aviators supported the hodgepodge commando force, but everything fell apart when a helicopter struck a transport aircraft on the ground in Iran. Eight US personnel were killed, and the hostages remained in captivity.

A congressional committee found that the disjointed nature of the operation, which brought together units from across the military, was one of the primary reasons for its failure.

The committee recommended that the Department of Defense create a dedicated special-operations command. As a result, the Nunn-Cohen Amendment to the National Defense Authorization Act of 1987 brought SOCOM to life.

SOCOM brought together all the US military’s special-operations units and added some new ones — such as the 160th Special Operations Aviation Regiment, known as the “Night Stalkers.”

The organization was only three months old when it was called it into action against a familiar enemy: Iran.

Ships in the Persian Gulf in August 1987.

Fighting also spilled into the Persian Gulf, through which much of the world’s oil supply is shipped.

Concerned that the war could disrupt that flow, and with prompting by local allies, the White House launched Operation Earnest Will in July 1987, deploying American warships to the Gulf to protect tankers from Iraqi and Iranian attacks.

But the US special operators played a big part in the overall operation to stop attacks on neutral shipping.

The crane aboard the barge Hercules prepares to lift a PB Mark III patrol boat into the water for a patrol, June 1, 1988.

Prime Chance was the secret part of Operation Earnest Will, and it gave SOCOM the opportunity to gets its feet wet and test tactics, techniques, and procedures, as well as how its units functioned as a team.

Rotating SEAL platoons were on standby to conduct Visit, Board, Search, and Seizure (VBSS) operations against suspected vessels and take down any that presented a threat or were caught laying mines.

A US Navy sailor atop a PB Mark III patrol boat tied up to the barge Wimbrown 7, November 1, 1988.

The MH-6s would buzz over the Persian Gulf searching for Iranian minelayers. When they found one, they would guide in AH-6s for an attack. MH-60 Blackhawks provided overwatch support and were on standby for combat-search-and-rescue operations.

In addition to large minelaying vessels, US special operators and the Navy had to deal with Iran’s fleet of small boats.

The small but heavily armed boats used by the Iranian Revolutionary Guard Corps would swarm slow tankers like hyenas, attacking from all sides with high-explosive rockets, rocket-propelled grenades, and machine guns.

The small boats could also lay mines. The Iranians used their oil platforms as observation posts to notify their small boats of potential targets.

One of the most important encounters during Operations Prime Chance took place on September 21, 1987. US Navy ships were tracking the Iran Ajr, a minelayer suspected of laying mines in the Gulf.

When MH-6 Little Birds spotted the Iranian vessels dropping mines into the sea, they called in the waiting AH-6s. The gunships made several runs against the ship with their mini-guns and rockets, inflicting serious damage.

A Navy SEAL platoon that was standing by came in after the AH-6s and boarded the Iranian vessel, capturing the crew members who were still on board. After a thorough search, the SEALs scuttled the vessel with explosives.

Mines aboard the Iran Ajr matched those on unexploded mines recovered after USS Samuel B. Roberts, a US Navy frigate, struck a mine and almost sank in April 1988. (US ships also faced attack from Iraqis.) After connecting Iran to the attack on the frigate, the US responded in force just a few days later.