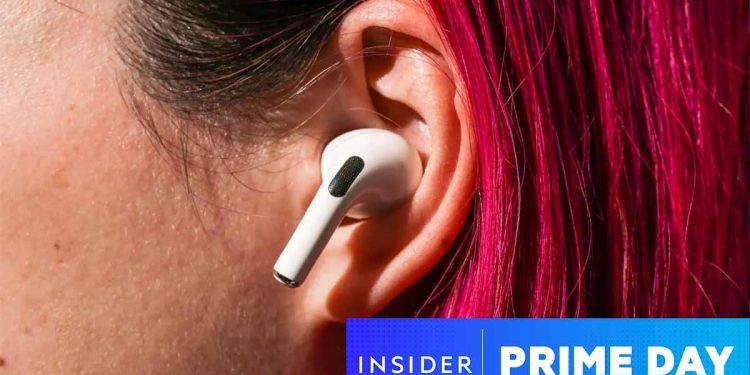 Amazon Prime Day 2022 kicks off on July 12 and runs through July 13. We expect to see big discounts on a number of products during the event, and early deals are already rolling in.

Right now, you can save on select Apple products and services, including AirPods, Apple Watch, and Apple Music.  Though we anticipate more deals once Prime Day officially begins, some products are already approaching all-time low prices on Amazon and a few competing stores.

This $100 deal price for Apple’s second-gen AirPods isn’t uncommon, but it’s still a solid markdown from their typical $120 cost. It’s also close to the all-time low of $89 we saw on Black Friday.

The AirPods Pro are the best in-ear model Apple offers, with active noise cancellation, spatial audio, and water resistance. We often see them discounted to this $175 deal price throughout the year, so we don’t recommend paying more for this model.

Apple’s AirPods Max carry over all the features fans love about the AirPods Pro into a wireless over-ear headphone design. Right now, they’re down to $430 from Amazon and Costco. However, you’ll need a Costco or Amazon Prime membership to take advantage of this deal.

With a recent Apple processor and many of the same features as the Series 7, the Apple Watch SE is a great budget-friendly option. Down to $229, this is a rare chance to save with the lowest price we’ve seen — though it’s only available in the silver and blue or space gray and midnight combinations.

If you still use wired headphones, you can get a great deal on Apple’s EarPods right now on Amazon. These earbuds connect to your phone or iPad using the lightning connector and feature a shape similar to that of AirPods.  Though the $18 price tag isn’t the lowest they’ve ever been, it’s still 39% off.

Apple Music works beautifully on Apple devices, plus there’s an app for it across a range of platforms, including Android. For a limited time, new subscribers can pick up six months of Apple Music for free at Best Buy. If you’re a returning subscriber, you’re also eligible for the promotion, but you’ll only get five months free.

For a limited time, new and returning subscribers can get three months of Apple TV Plus for free from Best Buy. The service has apps on a number of platforms, including streaming media players and smart TVs, and you can check out popular shows and movies like “Ted Lasso, “Severance,” and “CODA.”

Apple Fitness Plus has an on-demand library of workout classes that you can take. You’ll need an Apple Watch to sync your personal metrics, like heart rate and calories burned, which appear on the screen of your iPhone, iPad, or Apple TV. The service has 10 types of classes with new ones being added every week. New subscribers can try the platform out free for three months from Best Buy.

Check out our other great early Prime Day deals