7 Marvel movies to stream before you see ‘Thor: Love and Thunder’ in theaters 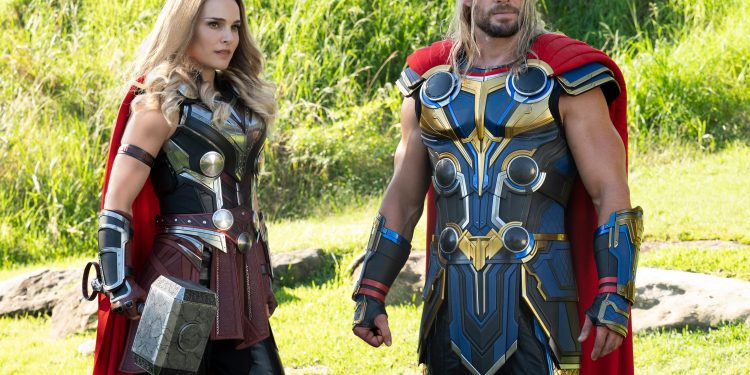 “Thor: Love and Thunder” is the latest film in the Marvel Cinematic Universe (MCU). The movie hits theaters on July 8 and takes place after the events of “Avengers: Endgame.”

Star Chris Hemsworth reprises his role as Thor for the eighth time. He’s joined by Natalie Portman, who returns as Jane Foster. The last time we saw Jane was in 2013’s “Thor: The Dark World,” and in this new installment she gains the powers of Thor.

Check out the trailer for ‘Thor: Love and Thunder’

Since Marvel movies are known to be full of references to past films and easter eggs, it’s likely that “Thor: Love and Thunder” will make some callbacks to previous “Thor” movies in addition to continuing the character’s storyline from the last two “Avengers” films. If you’re looking to catch up on everything that might tie into Thor’s latest adventure, we’ve got you covered.

Below, we rounded up every Marvel movie that we consider essential viewing before you see “Thor: Love and Thunder.” And though the Guardians aren’t expected to play major roles, we’ve included the films that introduce those characters for viewers who want to learn more about them.

7 Marvel movies to watch before ‘Thor: Love and Thunder’

Stream “Thor” on Disney Plus

“Thor” is one of the first movies in the MCU, and it helped lay the groundwork not only for the title character, but also for the entire Marvel saga. Chris Hemsworth plays Thor, who is banished to Earth after he provokes a war between realms.

He’s accompanied by his hammer Mjölnir, but an enchantment prevents Thor from lifting it until he proves himself worthy again. “Thor” sets up some long-running plot threads, including Thor’s antagonistic relationship with his brother, Loki (Tom Hiddleston), and the concept of the nine realms, which includes Asgard and Midgard (Earth).

The movie also introduces Jane Foster (Natalie Portman), an astrophysicist who finds Thor after he lands on Earth. As Thor begins to accept his banishment, he also falls in love with Jane.

Stream “Thor: The Dark World” on Disney Plus

The first sequel to “Thor” reunites the god of thunder with Jane as portals to different realms mysteriously open all over Earth. When Jane absorbs a powerful weapon known as the Aether, Thor brings her back to Asgard, where they try keep her safe from the Dark Elves.

Though footage of Natalie Portman does appear in “Avengers: Endgame,” “Thor: The Dark World” features Jane Foster’s last real appearance in the MCU prior to her return in “Love and Thunder.”

Stream “Guardians of the Galaxy” on Disney Plus

The first “Guardians of the Galaxy” movie doesn’t feature Thor himself, but it does introduce us to several characters who all make appearances in “Love and Thunder.”

The movie opens with a young Peter Quill being abducted by aliens. As an adult (played by Chris Pratt), Quill takes on the moniker of Star-Lord and soon teams up with a gang of fellow criminal outcasts, including Rocket (Bradley Cooper), Groot (Vin Diesel), and Drax (Dave Bautista).

Though these characters likely won’t play a huge role in “Love and Thunder,” this movie is a fun watch for anyone who wants to learn more about the group.

Chris Pratt and Dave Bautista in “Guardians of the Galaxy Vol. 2.”

Stream “Guardians of the Galaxy Vol. 2” on Disney Plus

The Guardians gain a new member in this sequel, which sees Quill learning more about his mysterious heritage. Mantis (Pom Klementieff) joins the team at the film’s conclusion; she has empathetic powers and had previously spent most of her life alone.

Mantis will also appear in the new “Thor” film alongside the other Guardians.

Stream “Thor: Ragnarok” on Disney Plus

Like the other two “Thor” films, “Thor: Ragnarok” is essential to check out before seeing the latest installment. The movie, which presents a more comedic take on the character, is directed by Taika Waititi. Waititi returns to direct “Thor: Love and Thunder,” so we can expect a similar tone.

In “Ragnarok,” Thor is stranded on the alien planet Sakaar, and with the help of new and old friends, he has to find a way to get back to Asgard to save the realm from his long-lost sister, Hela (Cate Blanchett).

The movie introduces new characters, including Valkyrie (Tessa Thompson), Korg (Waititi), and the Grandmaster (Jeff Goldblum). All three reprise their roles in “Thor: Love and Thunder.”

“Avengers: Infinity War” picks up Thor’s story right after the events of “Ragnarok” and features his first team-up with the Guardians of the Galaxy.

Thor begins the movie in space after the Guardians rescue him, and then spends most of the film with Rocket and Groot, as they planet-hop and search for a weapon to defeat Thanos.

Stream “Avengers: Endgame” on Disney Plus

The epic conclusion to Marvel’s “Infinity Saga” features major developments for Thor that will lead right into his story in “Love and Thunder.”

The movie picks up with Thor five years after “Infinite War,” having lost all hope after being defeated by Thanos. Depressed and out of shape, he reluctantly rejoins the Avengers after they come up with a plan to save their lost friends. The film features direct callbacks to “Thor: The Dark World” and even has a brief cameo with Jane Foster using archive footage.

At the end of “Avengers: Endgame,” Thor has renewed purpose and decides to join the Guardians in space after appointing Valkyrie the King of New Asgard. This is the character’s last appearance on screen before the events of “Love and Thunder.”